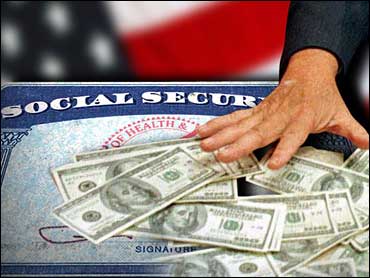 By Scott Conroy of the CBS News Political Unit.

It's only been a week since President Bush laid out a framework for his plan to overhaul Social Security during his State of the Union Address, but a flurry of television advertisements on the issue has already hit the airwaves. Although the ads are ostensibly designed to influence key members of Congress in targeted regions, there are no impending votes on Social Security. The groups' main goal appears to be to define the issue on their own terms and to emphasize the importance of the coming debate.

"I would speculate that these ads are essentially trying to influence public opinion," said AARP CEO William Novelli, following remarks delivered at the National Press Club on Wednesday.

The Club for Growth, a free-market advocacy organization, released an ad last week that urges viewers to call three undecided Republicans – Rep. Joe Schwarz of Michigan, Rep. Sherwood Boehlert of New York and Sen. Lincoln Chafee of Rhode Island – to support the president's plan. The ad makes the case that while Social Security is safe for older Americans and baby boomers, younger workers who pay into the system will "get just a fraction back when they retire," if the system is not reformed. According to the group's press release, the ad is intended to influence the above-mentioned undecided Republicans.

"This ad is a gentle message about the virtues of personal accounts and a blunt message that we are watching their actions on this issue with great interest," said the group's president, former Congressman Pat Toomey.

Progress for America is another conservative group that supports Social Security reform through private accounts. According to its Web site, it "promotes nonpartisan policies that stimulate the economy, reduce tax burdens on American families and businesses, and encourage free trade."

The group's new 30-second spot frames the president's proposal in a positive light, pointing out that no changes will be made for those 55 or over and calling Mr. Bush's framework "the right thing to do for every generation." The ad features snippets from the president's State of the Union address, when he made the case for changing Social Security in order to save it. "We have to move ahead with courage and honesty because our children's retirement security is more important than partisan politics," says Mr. Bush.

Groups that are leading the charge against the president's proposal to allow younger workers to divert a portion of their payroll taxes into private investment accounts include AARP and MoveOn.org. AARP, the national advocacy group for older Americans, has already embarked on a massive letter writing and advertising campaign. The group favors moderate changes to improve the program's solvency, but staunchly opposes the Bush plan.

"Taking money out of Social Security payroll taxes for private investment accounts would worsen the solvency outlook rather than improve it, and could lead to large benefit cuts," said Novelli, the AARP CEO. "This approach is risky, hugely expensive and unnecessary."

MoveOn.org released its own biting response to the president's proposal. In a television advertisement, the group chides "George Bush's planned Social Security benefit cuts of up to 46% to pay for private accounts."

MoveOn's characterization of the Bush proposal as a cut in the system set off a wave of rebuttals and counter-rebuttals with Factcheck.org, a nonpartisan citizens' advocacy group that seeks to point out deception and intentional confusion in politics. Factcheck accused MoveOn of falsely implying that the Bush plan would have a negative impact on current Social Security beneficiaries and disputed MoveOn's assertion that it would result in direct benefits cuts for future generations. Noting that the president has not yet proposed a specific plan, Factcheck also argued that due to inflationary wage indexing, a reduction in currently projected benefits "would more properly be called a 'freeze' than a 'cut.'"

"What MoveOn is doing is very similar to what we used to see when we talked about when budget changes brought before inflation were budget cuts or not, is it a cut before what you otherwise would have gotten?" said Norman Orenstein of the American Enterprise Institute.

Factcheck went on to classify MoveOn's spot as a "false TV ad."

"This is one of those areas where in the formal sense, Factcheck is right. These are not cuts," Ornstein said. "But it's not a situation where it's Factcheck:100, MoveOn:0. It's probably more like Factcheck: 55, MoveOn: 45."

MoveOn responded to Factcheck's accusations by reaffirming the accuracy of its ad on the grounds that "the longstanding debate on Social Security has proceeded from the standpoint that not paying currently scheduled benefits is a 'cut,' and that is the framing that both sides in the debate have adopted."

Factcheck published MoveOn's response on its Web site but stood by its assessment that the ad was misleading.

"This ad is not lying. [MoveOn is] exaggerating a point to fit a point of view, but it's not lying," Ornstein said.

As the squabble over semantics continues, so do plans to release more television advertisements, as the high level of interest among these lobbying groups appears to have solidified Social Security's future as the preeminent domestic issue in President Bush's second term.

AARP has already made plans to expand its advertising campaign. "We're going to try a little humor this time, so stay tuned," Novelli said.