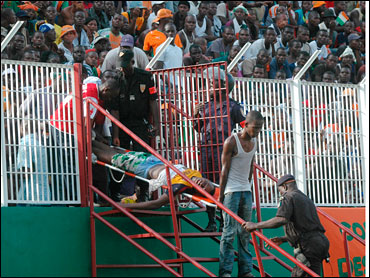 A stampede at a World Cup qualifying soccer match in the Ivory Coast killed at least 22 people and wounded 132, authorities said.

Fans at the Felix Houphouet-Boigny arena pushed against each other shortly before the game between Ivory Coast and Malawi, setting off a panic that led to the stampede, Interior Minister Desire Tagro said on state television.

"They started pushing to get in because the match was about to start and each and every one of them wanted to get in," Tagro said.

An Associated Press photographer said people began shoving and pushing 40 minutes before the beginning of the game. Police fired tear gas into one section of the crowd.

Ollo Kambire, a reporter for "Super Sport," a daily newspaper focusing on sports, said that a wall collapsed under the weight of the fans as they pushed toward the field. "We saw people falling. ... Then there was panic and a stampede," he said.

There have been a number of stampedes at Africa's crowded stadiums. Badly equipped security forces are far outnumbered and are often unable to control the voluminous crowds.