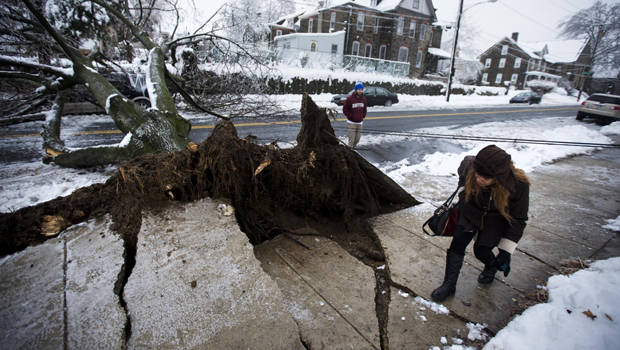 Snow and freezing rain crippled the Northeast and Midwest on Wednesday for the second time in a week, forcing airlines to cancel thousands of flights, closing schools, offices and government buildings, and cutting power to hundreds of thousands.

U.S. airlines canceled more than 2,800 flights, most from the New York-area airports, Boston, Chicago, Philadelphia and Washington. United Airlines said the disruptions also affected flights in the Midwest, including Chicago and Cleveland.

The disruptions come in addition to 1,600 cancellations Tuesday and 2,100 on Monday, according to flight tracking site FlightAware. Fliers should get a break on Thursday, with few flights expected to be affected by weather.

All of the slush could slow national economic growth by half a percent this quarter, a significant effect on an economy that grew only 2.7 percent last year.

With supply chains disrupted, manufacturing hours were down, and the construction industry shed 25,000 jobs. Even in sunny California, a cold snap has caused $440 million in damage to the citrus crop above and beyond what the drought is doing.

Across the eastern half of the United States, the storm caused hundreds of thousands of power outages, after wreaking similar havoc in the Midwestern heartland on Tuesday.

Icy conditions knocked out power to more than 750,000 customers in Pennsylvania, the most since Superstorm Sandy. Maryland is warning 155,000 customers it may be days until their electricity is restored.


In New York, Gov. Chris Cuomo closed a 65-mile stretch of interstate between the Pennsylvania border and Connecticut. Road crews were racing to clear the mess all day, and often they fell behind.

"Because tires are inadequate so they can't stop or start," he said. "They get stuck in a spot, we have to get a tow truck to pull them out of a ditch or something like that."

Up to a foot of snow fell in places in upstate New York; hundreds of schools were closed. Four inches of snow and a quarter-inch of ice covered New York City.

The state deployed 3,500 tons of stockpiled road salt to New York City, where supplies were running low, while plows and other heavy equipment aimed to keep roads clear.


A fatal crash shut down the Pennsylvania Turnpike in both directions outside Harrisburg for more than 13 hours. A separate crash involving a tractor-trailer and the Army women's basketball team charter bus, which had been scheduled to play Lehigh University in Bethlehem, sent more than a dozen players to local hospitals to be checked out for what officials said were non-life-threatening injuries.

Two traffic deaths Tuesday south of Pittsburgh in Crawford County were blamed on the weather.

Iowa authorities say road conditions may have contributed to a vehicle collision in Des Moines that killed one person.

A 30-car pile-up near Jackson, Mich., closed Interstate 94 for hours, as across the state, AAA got 1,100 calls for help.  The state received more than 6 inches of snow in some areas, snarling traffic.

Most of Ohio was hit with heavy snow and freezing rain, closing hundreds of schools and creating extremely hazardous driving conditions. Many counties declared snow emergencies.

"I wish that groundhog would have stayed in its hole," said Geoff Dunn, who took the bus to his downtown Columbus office. "Finding us six more weeks of winter was not the smart move."

Two ships carrying 50,000 tons of salt arrived in Wisconsin, where some communities had started mixing sand with salt to stretch their supplies.
The city of Milwaukee had used 62,000 tons of salt before two storms that hit Saturday and Wednesday. That is already 5,000 tons more than it uses in a typical winter.

In far northern Wisconsin, severe conditions caused officials to ask thousands of homeowners to leave their faucets running 24 hours a day to prevent water pipes and sewer lines from freezing.

The 9,000 Rhinelander residents won't be charged for using the extra water. Temperatures in the area are expected to be below zero for much of the week.

In Chicago, a runner was credited with helping save a man who fell into icy Lake Michigan with his dog on Tuesday.

Adam Dominik said he found twine and anchored it around himself while throwing the other end in the water, pulling the man and the dog onto nearby rocks. Meanwhile, a skier called 911.

Rescuers pulled the man the rest of the way to safety. He was taken to a hospital. Both he and his dog were expected to recover.