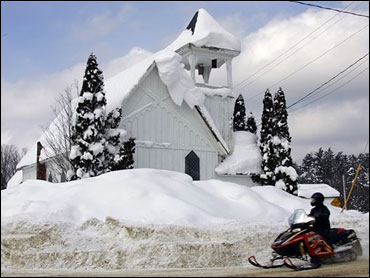 Unofficially, the squalls have dumped 12 feet, 2 inches of snow at Redfield. If accurate, that would break the state record of 10 feet, 7 inches of snow that fell in nearby Montague over seven days ending Jan. 1, 2002, said Steve McLaughlin, a meteorologist for the National Weather Service in Buffalo.

A weather service representative was being sent to Redfield on Monday to verify the total.

While this current band of lake effect storms is expected to end Monday night, CBS News correspondent Kelly Wallace reports that a new wave of snowy weather may sweep across the region later this week.

The heavy snow is common along the Tug Hill Plateau, a 50-mile wedge that rises 2,100 feet from the lake's eastern shore. It usually gets about 300 inches — roughly 25 feet — of snow a year.

"It's snow. We get a lot of it. So what?" said Allan Babcock, a lifelong resident who owns Shar's Country Diner, a popular eatery in this village of 650 people.

However, Gov. Eliot Spitzer has declared a state disaster emergency in Oswego County. The county's community of Parish had recorded 115 inches by early Sunday. Mexico had 103 inches, North Osceola had 99 and Scriba 94. The city of Oswego had 85 inches.

The persistent snow bands that have wracked the county for a week were expected to finally end later Monday.

"We have a sharp front coming in Monday that's going to kick all this out. We may get one more burst of snow. But then it's over. Finally, some mercy," McLaughlin said.

However, the forecaster noted that a coastal winter storm expected midweek could bring another 6 to 12 inches to areas of upstate New York.

As the bands shifted north into Jefferson County most of Sunday, residents continued recovering from the heavy snow. Roads were mostly cleared as workers turned their attention to removing the snow and trimming down 10- and 12-foot-high snow banks that continued to make driving dangerous.

The snow led to surreal scenes. One house appeared to be in a cocoon. Drifting snow in the front had swallowed the front door and blocked the windows.

"In all my life, I mean my entire life combined, I've never seen this much snow at once," said Jim Bevridge, 47, of Timmonium, Md., who drove up for a long weekend of snowmobiling.

The intense blast of snow hasn't been blamed for any deaths in Oswego County. Elsewhere, however, more than a week of bitter cold and slippery roads have contributed to at least 25 deaths across the northeastern quarter of the nation — five in Ohio, four in Illinois, four in Indiana, two in Kentucky, seven in Michigan, and one each in Wisconsin, and Maryland and elsewhere in New York, authorities said.