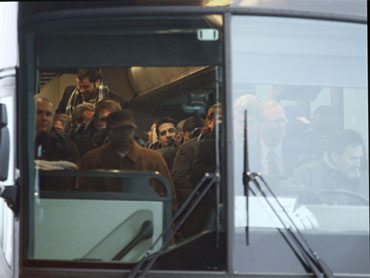 Brett Favre has got to love a snowstorm. His ailing shoulder has been given another day to heal.

The Giants-Vikings game was moved to Monday night because Minnesota had at least 15 inches of snow and wind gusting over 30 mph and the New York team was waiting it out in Kansas City.

The delay gives Favre, the Vikings' 41-year-old bionic quarterback, another day to rest his sprained throwing shoulder. Favre is aiming to make his NFL-record 298th straight start, but he has barely practiced all week. He's listed as questionable for the game, after getting hit hard and slammed to the turf on his first pass of last week's game against the Buffalo Bills.

Favre built his reputation in the cold and snow in Green Bay, winning a playoff game during his last season with the Packers in 2007 with flakes falling all over Lambeau Field.

As for the Giants? They must really be tired of these trips to Minnesota by now.

The Vikings and Giants are set to play for the ninth time in the last 10 regular seasons, a scheduling quirk that has slated seven of those meetings — this year would be three in a row — for Minnesota.

With more than a foot of blowing snow falling in the Twin Cities area throughout Saturday, the Giants' charter flight was diverted to Kansas City instead. After hanging out in the terminal for a bit, the team then settled in to spend the night there, with an initial plan in place to fly to Minnesota on Sunday morning and make it to the stadium in time for regularly scheduled noon kickoff.

But the NFL made the announcement later Saturday night that the game was being moved.

Giants spokesman Pat Hanlon said on Twitter the team "monitored weather all week" and moved up the departure time by 3½ hours Saturday. That didn't prove to be enough of a head start to make it to Minneapolis before the airport shut down all runways.

Last season, an approaching snowstorm in Baltimore prompted a Sunday game between the Ravens and Chicago Bears to be bumped back three hours, but such a switch in this television-driven league is rare.

The Vikings weren't exactly enjoying a hassle-free weekend, either, simply because they were at home. Most players live in the suburbs near the team's offices and practice facility, about a 20 minute drive from the Metrodome without heavy traffic or tough conditions, and they still had to make it to the downtown hotel where they stay the night before games.

Left tackle Bryant McKinnie announced on Twitter shortly after 6 p.m. local time his plan to be cautious: "Heading 2 the hotel, giving myself a 2 hour window 2 make it n this weather."

McKinnie checked in with an update a little later: "I made it 2 the hotel safely, it took us about 45 min, when its usually about 20 to 25! All good though."