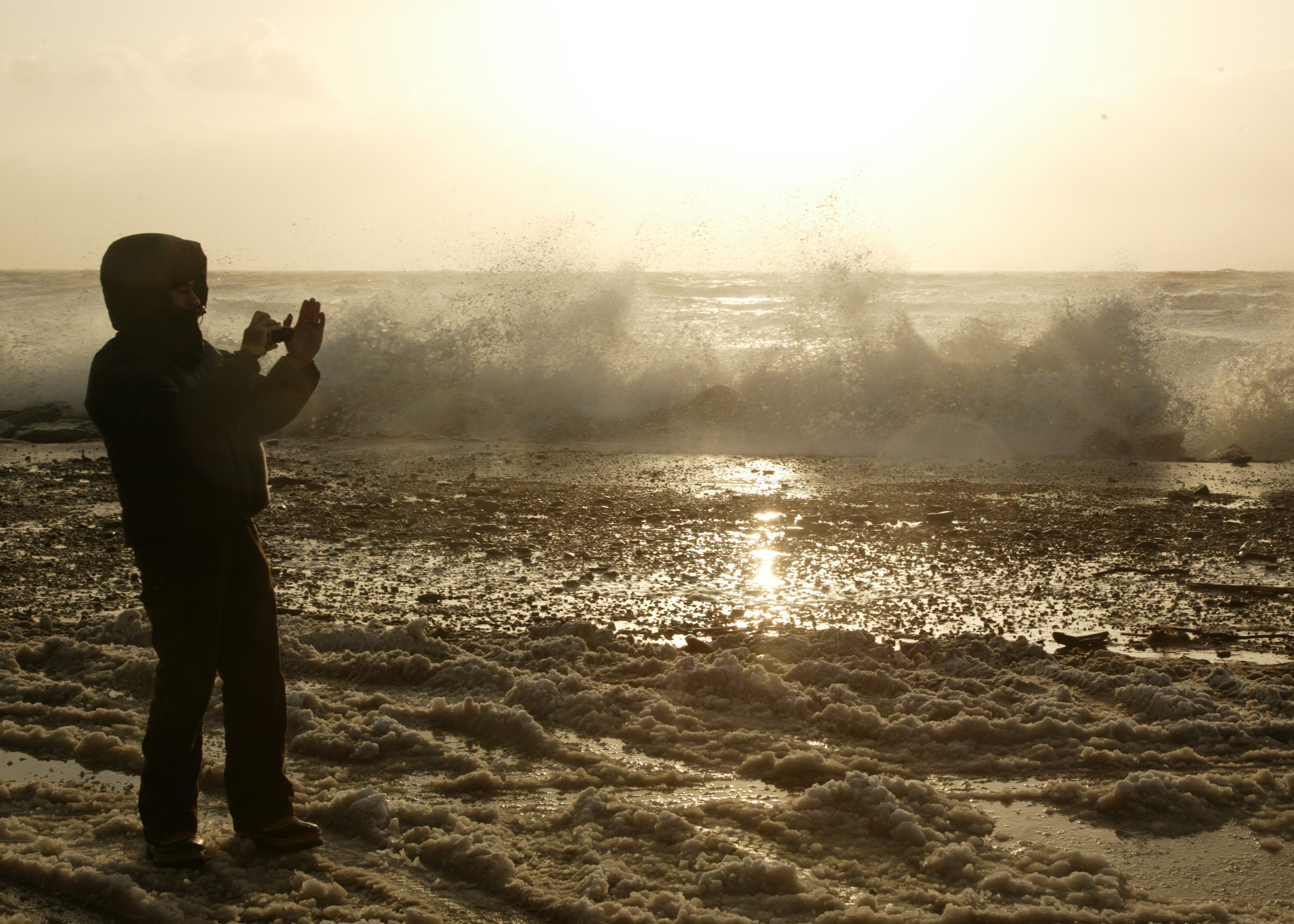 ANCHORAGE, Alaska - Packing hurricane-force winds, an Alaskan storm of "epic proportions" slammed into coastal communities, sending some residents fleeing to higher ground as it tore roofs from homes and knocked out power.

"It's barely beginning to wind down along the coast," Stephen Kearney, a meteorologist for the Weather Service in Fairbanks, said late Wednesday night.

Emergency officials warned that areas on Alaska's western coast between Norton Sound and Point Hope were vulnerable to a possible surge of sea water that could bring varying degrees of flooding to villages already soaked.

However, there were no new reports of substantial damage in Nome late Wednesday night, the National Weather Service said.

"The sea level will remain steady into the early morning hours and then start to come down tomorrow morning," Kearney told the Anchorage Daily News.

Flooding was reported in Point Hope, where the water came within 10 feet of the airport runway, but the community still had power, Kearney said.

Earlier, the storm produced 85-mph gusts, well above hurricane force. But emergency managers said that the winds had begun to taper off and were clocked with still-potent gusts of 55 mph. The storm passed through more southern points of its path.

Some villages, such as Kivalina, could be even more vulnerable with winds shifting as they head to Russia, officials said.

"This is a storm of epic proportions," said meteorologist Jeff Osiensky with the National Weather Service. "We're not out of the woods with this."

The last time the communities saw something similar was in November 1974, when a storm created a sea surge that measured more than 13 feet. The surge pushed beach driftwood above the level of the previous storm of its type in 1913.

The weather service said "a potent upper level disturbance" rotating around the Bering Sea storm is expected to bring 3 to 8 inches of snowfall to the Anchorage area by Thursday afternoon. The service issued a winter weather advisory for Anchorage in effect until noon Thursday.

Jeremy Zidek, spokesman for the state's emergency management agency, noted there have been no reports of injuries, and that damage so far has been largely limited to blown-out windows and battered roofs. Nome, Hooper Bay and Tununak reported scattered power outages. During outages, officials were able to maintain contact with communities by satellite phone and VHS radios.

Wednesday's planned test of the National Emergency Alert System was cancelled in Alaska due largely to the weather, KSRM-radio reported.

The highest wind gusts recorded — 89 mph — were at Wales at the western tip of the Seward Peninsula, which forms the U.S. side of the Bering Strait, said Bob Fischer, lead forecaster for the weather service in Fairbanks.

"People said they were worried," Weyapuk said. "When the wind gusted here, it was pretty loud inside their homes."

Some families moved to the school overnight as a precaution. Water came high into dunes in front of the village and approached the school steps, he said. But a drive through the community of 136 before the sun came up revealed little damage.

The southeast direction of the wind helped, Weyapuk said.

"The wind was blowing parallel to the beach instead of from the south or southwest, which would have brought the waves straight in," he said.

In Nome — the biggest of the coastal communities with about 3,600 residents — wind gusted to 61 mph. City officials said Wednesday afternoon that they closed and barricaded streets in low-lying areas where flooding was reported and urged residents to keep clear of those areas.

Residents along Front Street, which runs less than 100 feet from the seawall that protects Nome from the Bering Sea, were asked to voluntarily evacuate Tuesday night. They stayed with friends on higher ground or at one of two shelters opened by the city at a recreation center and at a church, Brown said.

About 180 miles to the northeast, in Kotzebue, the regional hub for northwest Alaska villages, the storm had quieted down by 10:30 a.m.

Wind gusting to 74 mph had damaged a few sheds and roofs. But power, phones and other utilities were not interrupted, said Dennis Tiepelman, public administrator for the Northwest Arctic Borough.

"Just debris and loose stuff flying around. No power outage, no utilities were off," Tiepelman said.

As the storm moved north to the Chukchi Sea at midday, a 14-foot rock seawall was holding up in Kivalina, one of the villages hardest hit by coastal erosion in recent decades, said community spokeswoman Colleen Swan.

Damage so far was limited to tin roofing on homes.

Swan's sister, Marilyn Swan, made the five-minute walk to her job as the city clerk. By the time she arrived, she was covered with clumps of snow.

"I've never seen it that bad before," she said. "We've had storms, but this is pretty strong."

The state and emergency managers in the villages have long prepared for the powerful storms that batter Alaska's western coast, holding twice-yearly meetings on dealing with emergencies. In the past few years, the state has held evacuation workshops as well, Zidek said.

Francis said the storm hit after most crab fishing had concluded.

"We're kind of in a lull with a lot of the fisheries," she said.