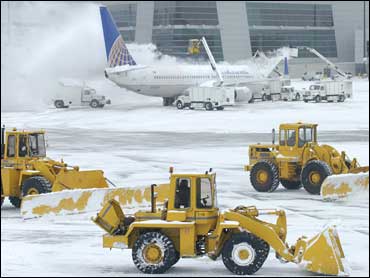 All across the Northeast, March stormed in with a message, reports CBS News Weather anchor Dave Price: Winter's not over yet.

School systems from the Carolinas to New England closed Monday. In New York City alone, more than a million kids enjoyed a snow day - the first in five years.

Dozens of schools across New Hampshire, New Jersey and Maine also gave children a snow day. Schools in Philadelphia and Boston did the same.

Some New York parents complained that the city waited until 5:40 a.m. to call off classes, saying they didn't have enough notice. Mayor Michael Bloomberg brushed off the criticism and praised the city's storm response, which included dispatching 2,000 workers and 1,400 plows to work around the clock to clean New York's 6,000 miles of streets.

"It's like plowing from here to Los Angeles and back," Bloomberg said at a news conference, standing in front of an orange snow plow at a garage.

While kids squealed with delight, city budgets shivered under the weight. New York City estimates the cost of snow removal at $1 million for every inch that falls. With Monday's accumulation, it's at least an $8 million job. And, in New Jersey, the state has spent about $22 million on snow so far this winter, about twice what was budgeted.

"It's been a brutal winter it hasn't let up yet," says snow plow driver Steve Grant.

The storm started in the South, Price reports, and by Sunday night, drivers in South Carolina were abandoning their cars on Interstate-85. First a downed power line halted traffic, and then cars became stuck in the snow.

At least four people were reported dead in traffic accidents as the storm made its way north. In Atlanta, ice brought a tree down on a house, causing a fire but no fatalities.

Philadelphia declared a Code Blue weather emergency, which gives officials the authority to bring homeless people into shelters because the weather poses a threat of serious harm or death.

Travelers were stranded everywhere, with most flights canceled at the three main airports in the New York area and at Boston's Logan International Airport. The Boston airport had to shut down for about 40 minutes to clear a runway.

Power has been restored to thousands of people in northern Virginia, but many southern Maryland residents are still in the dark.

By 5:15 p.m., the Southern Maryland Electric Cooperative was reporting more than 7,000 customers were without power in St. Mary's, Calvert and Charles counties. St. Mary's appeared to be the hardest hit with about 5,000 customers losing power.

In northern Virginia, Dominion Power is reporting power has been restored to all but 750 customers. The Richmond area was hardest hit, though, with about 35,000 power outages.

The storm is winding down in Philadelphia but only after the tail end dumped a few more inches of snow in the area.

The National Weather Service reports just over 9 inches of snow fell at Philadelphia International Airport, though other neighborhoods and parts of downtown received less.

Snowfall totals in the suburbs are ranging from more than 9 inches in Perkasie to a little over 4 inches in Langhorne. In the Lehigh Valley, Easton got 9 inches but Allentown and Bethlehem got less than half that.

But the problems weren't restricted to the roadways and the airways, Price reports, 140 people spent the night Sunday on an Amtrak train stuck between Washington D.C. and Newport News, Va., unable to go forward or backward, although they did have heat and food.