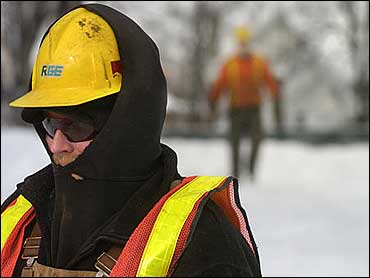 A blustery snowstorm combined with painfully cold arctic air descended on the Northeast on Thursday, trapping New York-bound ferries in the ice, grounding hundreds of flights and prompting warnings to bundle up from Maine to Pennsylvania.

Fine, powdery snow fell across much of the region, with the mercury dipping into the single digits in some places, and 20 and 30 degrees below zero in others — a combination that closed schools, disabled car batteries, produced spinouts and fender-benders, and forced even ski resorts to close.

In Yonkers, N.Y., retired construction worker Thomas Robbins, 66, pulled over to the side of the slippery Bronx River Parkway. "Mostly I'm resting my hands," he said. "I'm gripping the wheel so tight because I'm afraid of skidding."

The bitter cold was expected to continue or worsen into Friday.

New York City reached a high of just 14 degrees and got 5 inches of snow before it tapered off to flurries at midmorning. With a wind chill of 20 below zero in the forecast for Thursday night, the city planned to search the streets for homeless people and bring those in danger indoors — against their will, if necessary.

Dennis Schiraldi of New York City, a marketing rep who does business throughout Long Island, said he spent 2½ hours on a trip that usually takes him 75 minutes. "It was a crawl the whole way here," he said.

Philadelphia got 4 inches of snow and reached a high temperature of 22, but the mercury was expected to drop to zero for the first time in a decade Thursday night.

Boston saw only a dusting of snow, but Harwich, Mass., on Cape Cod received 4 inches. The low for Boston came in at minus 4.

In Uxbridge, Mass., near Worcester, school buses had trouble running because the cold caused their diesel fuel to congeal. School officials finally told parents to keep their children home.

Big Rock ski resort in Maine closed for a second straight day. General manager Tim Prather said it was minus 12 by midday, which felt like 37 below with the wind. "That's pretty brutal when you're going up a lift," he said.

Portland, Maine, Police Chief Michael Chitwood said the cold caused a drop in crime, with fewer reports of car break-ins, robberies and street crimes. "It's worth about an extra six officers in the field keeping crime down," he said.

In Whitefield, N.H., the temperature dipped as low as 35 degrees below zero. In Watertown, N.Y., it was minus 31, with a wind chill of minus 46.

Before descending on the Northeast, the storm hit the Great Lakes states on Wednesday with blizzard-like conditions. Wisconsin got up to 11 inches of snow, and 10 inches fell in Detroit's far northern suburbs.

"I'm brushing as much snow out of my eyes as I am off my car," said Layla Abdul-Rahman, 32, of Dearborn, Mich. "This would be a good time to buy a ticket back to Lebanon."