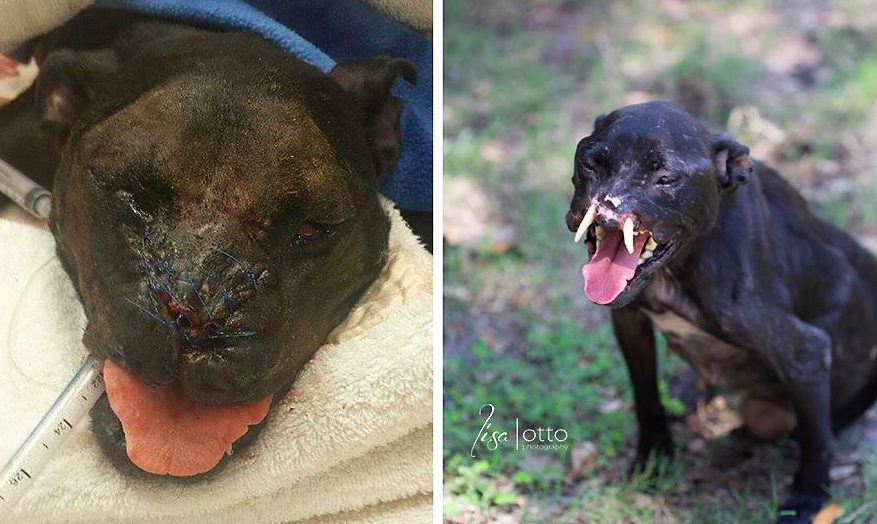 A pit bull that was abused to the point where she was missing nearly half of her face can finally breathe again.

The "happy as can be" dog that was abandoned in a yard earlier this month without a nasal cavity finally got the nose she should never have lost in the first place.

During a long surgery on Thursday, Dr. Colby Burns, of Tampa Veterinary Specialists, elevated the dog's own facial tissue, bringing it around front to create two nasal passage openings.

The 30-pound dog named "Khalessi" is now recovering in Hays Towne Veterinary Hospital in Hudson, Florida, where she'll stay for at least a week.

Thousands of people have been following the story of Khalessi, known as the dog with the unbelievable "spirit." The small pup already has more than 25,000 Facebook followers and thousands of donations pouring into a foundation in her name.

"It's been amazing," Otto said. "She has shown everyone that despite having a horrible start to life, there is still a chance for forgiveness, a chance for love."

Two weeks ago -- days after the dog was rescued -- the founder of Passion 4 Pits, Stephanie Paquin, told CBS News X-rays showed the dog once had a broken back, pelvis and rib fractures and damage to her legs from blunt force.

It was clear the dog was "severely abused, systematically over a period of time," Paquin said, speculating that the dog may have been used as a bait dog. "[But] she's like a blank slate -- she doesn't think about what happened."

Despite people criticizing the rescuers, asking them to "put her out of her misery," Otto says they will continue to care for her.

"We hope that people will not give up, not turn away from an animal they think won't make it," she said. "So many times people have said that we should of put Khalessi out of her misery but she has proved to us that she has a long life ahead of her and we are all willing to fight for her."

Khalessi has at least half a dozen surgeries ahead of her. Next up: a surgery that will give her the ability to walk normally again.

Until then, she's going to rest easy.