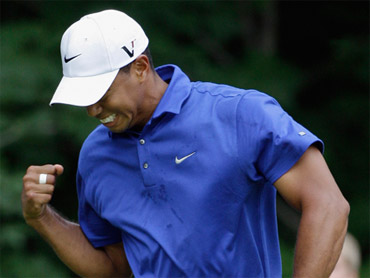 In both a skit and multiple "Weekend Update" jokes this weekend, NBC's comedy institution took on the golfer, who has admitted to letting his family down with "transgressions" that came to light following a strange Thanksgiving weekend incident outside his Florida home.

In one skit, actor Jason Sudeikis portrayed Wolf Blitzer on CNN's "Situation Room" reporting on a news conference that Woods (played by Kenan Thompson) and his wife (played by Blake Lively) were holding outside his home. After Woods admitted to "multiple" transgressions, his wife looked surprised and the screen quickly shifted back to Blitzer.

"Breaking news," Blitzer said. "Tiger Woods is back in the hospital. "Apparently just hours after a press conference where he confessed to multiple transgressions, Woods had an accident in his home where he fell down a flight of stairs then inadvertently threw himself through a plate glass window."

Woods returned for a later news conference, his wife brandishing a golf club next to him, where he said, "Wow, I've been really clumsy this week."

He had more such "accidents," then returns to read a prepared statement with the words "help me" and "I'm scared" written on the back of the papers for the audience to see.

"Last Friday Tiger Woods hit a tree and a bunch of ladies fell out," he said.

Meyers noted that Woods and his wife were in negotiations over their prenuptial agreement, and "what's really weird is he presented her with one of those huge, oversized checks."

Woods' sponsors are sticking with him, Meyers said, "a gesture that only means one thing - women don't watch golf."