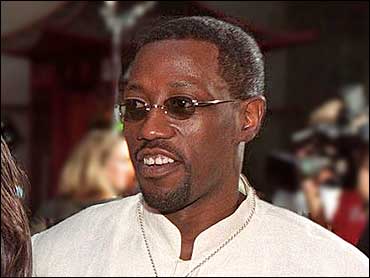 Actor Wesley Snipes is a victim of "unscrupulous tax advice" and is being selectively targeted for prosecution on federal tax evasion charges because he is black, his attorneys argue in a motion to dismiss the indictment.

That's what Snipes has said all along about the charges.

In a June 4 motion to dismiss the indictment, Snipes' attorneys argue that prosecutors filed additional tax evasion charges against him and not against two co-defendants because they are "Caucasian, while Mr. Snipes is African-American."

A federal judge is still considering the motion.

The Oct. 17 indictment charges Snipes with fraudulently claiming refunds totaling nearly $12 million in 1996 and 1997 for income taxes already paid. The star of the "Blade" trilogy and other films also was charged with failure to file returns from 1999 through 2004.

The indictment said Snipes conspired with American Rights Litigators' founder Eddie Ray Kahn and tax preparer Douglas P. Rosile Sr. to file false refund claims based on a bogus argument that only income from foreign sources was subject to taxation.

Snipes' motion says he should be counted among 2,000 people who relied on Kahn and Rosile for tax advice, not as one of their co-defendants.

The indictment said Kahn and Rosile, through American Rights Litigators, collected fees of up to 20 percent of refunds from fraudulent tax returns.

There was no immediate response Sunday to calls seeking comment from Snipes' manager or a spokesman for the U.S. Attorney's office.