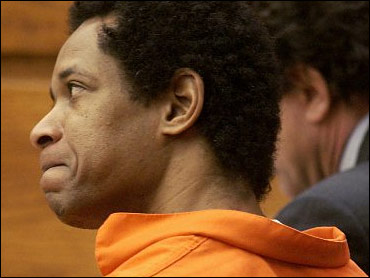 Prosecutors believe they can find an impartial jury in Prince William County to try sniper suspect John Allen Muhammad, but they will consider his request to allow a judge to decide the case, according to court papers.

Muhammad would have to "voluntarily and intelligently" waive his right to a jury trial and swear to accept the judge's verdict and sentence before prosecutors would consider allowing a bench trial, Commonwealth's Attorney Paul Ebert said.

Muhammad, 42, is charged with capital murder in the Oct. 9 slaying of Dean H. Meyers, 53, outside a gas station just north of Manassas.

His defense attorneys argue that media coverage of the string of sniper attacks that killed Meyers and nine people and terrified the Washington, D.C.-area for three weeks last fall have made it impossible to find an impartial jury in the county.

If prosecutors don't agree to a bench trial, the defense wants the trial moved out of the area.

In Fairfax County, attorneys for Muhammad's alleged co-conspirator, Lee Boyd Malvo, 18, also have requested a change of venue. Malvo is facing trial in the Oct. 14 shooting death of Linda Franklin, 47.

In all, the two men have been linked to 20 shootings, including 13 deaths, in Virginia, Maryland, Georgia, Alabama, Louisiana and the District of Columbia.

Prosecutors in Prince William County responded to Muhammad's motions in court papers unsealed Friday. A hearing is scheduled for Monday.

In response to the defense claim that everyone in northern Virginia was victimized by the sniper shootings, prosecutors said only those directly injured in the shootings or who suffered "personal emotional injury" were true victims of the attacks by legal standards and should be barred from serving on the jury.