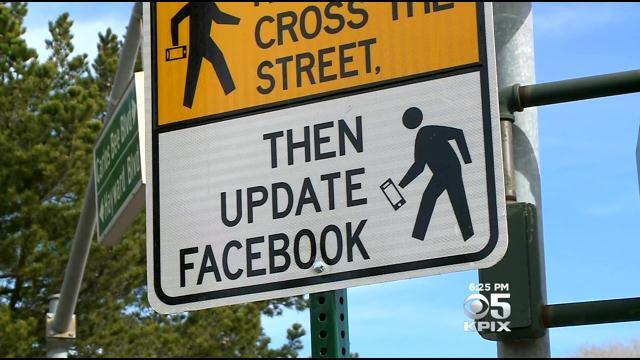 So, to get people's attention, the city of Hayward has put up a few new signs that are a bit snarky.

Along with the posted speed limit, one of the signs also reads, "It's a speed limit, not a suggestion." Another sign gives helpful advice about driving down a hill.

Holland, who wrote the new signs, used to work in marketing and brought a creative approach to a typically mundane medium.

Another sign reminds students to pay attention when crossing the busy street, telling them to update Facebook when they're not in the crosswalk.

"We are all on social networks so that is something we will all pay attention to," said Karla Tatum, a student at California State University East Bay.

But there could be one problem. "They're gonna have to keep coming up with new ones, I think," said Hayward resident Kevin Dankwardt.

Which means Holland needs to work on some new material.

"I'm the guy that everybody can point at and say, 'God, those are horrible.' But you know what? If they say they're horrible, that's okay, because they're still talking about the message and hopefully slowing down," Holland said.

In May 2014, transportation officials in Massachusetts did something similar. As CBS Boston reported, highway signs around the area incorporated the local vernacular into their safe driving message.

The first page of the signs read, "Changing Lanes?" They were followed by, "Use Yah Blinkah"

The Boston dialect , residents have a reputation for dropping the R's at the end of words.