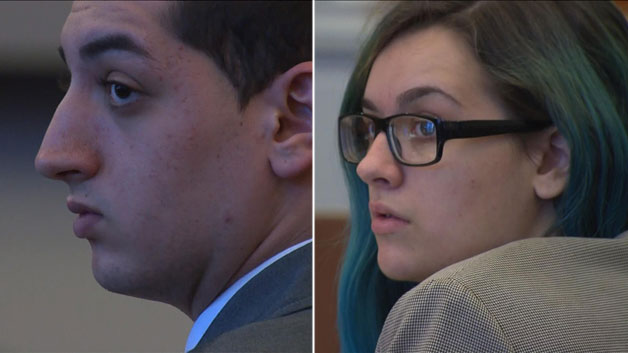 SALEM, Mass. -- A man and a woman in Massachusetts have been convicted of charges they sexually assaulted a 16-year-old girl and recorded the attack using Snapchat.

Prosecutors say 21-year-old Rashad Deihim and 20-year-old Kailyn Bonia were found guilty Tuesday by a jury of assault with intent to commit rape and related crimes stemming from the September 2014 attack.

Last week, the victim testified, reports CBS Boston. She told the court she remembered waking up nude and confused.

"I remember saying, like, 'stop taking pictures of me'....I was naked and I was getting flashes," she told the court.

Among those watching the assault on Snapchat was teenager Syndee Enos, who took the witness stand last Wednesday. She said she knew the teens in the video, and that she saw the victim being restrained.

"She was holding her down...almost in a headlock," said Enos. "She was kind of wiggling around trying to get out of it."

Screenshots from the Snapchat video were shown to jurors during the trial. The victim recalled drinking vodka with Deihim and Bonia on a couch in the woods near an elementary school in Saugus.

A friend of the victim testified that she received graphic videos of the assault.

Deihim and Bonia are scheduled to be sentenced Sept. 6.