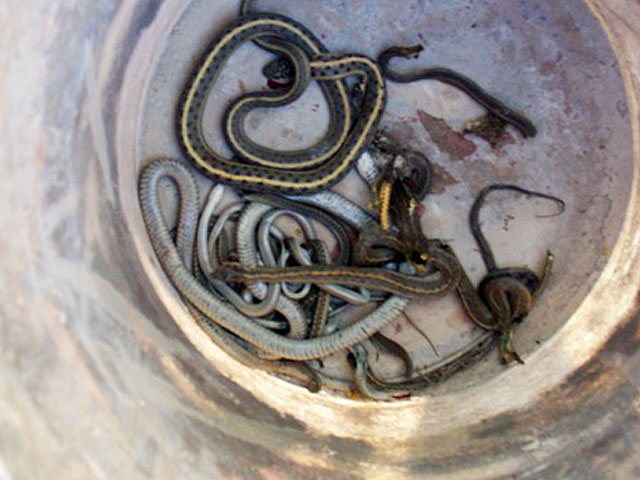 REXBURG, Idaho - The five-bedroom house sits on pastoral acreage in the rural U.S. countryside. At a price less than $180,000, it seemed a steal.

But a bargain it wasn't. Ben and Amber Sessions soon realized the dream home they'd purchased in Idaho for their growing family in 2009 was infested with hundreds upon hundreds of garter snakes.

The ground surrounding the home appeared to move at times, it was so thick with snakes.

Throngs of snakes crawled beneath the home's siding. At night, the young couple said they would lie awake and listen to slithering inside the walls.

"It was like living in one of those horror movies," said Ben Sessions, 31.

The family would frequently eat out because their well water carried the foul smelling musk that the snakes release as a warning to predators.

Each day, before his pregnant wife and two small boys got out of bed, Sessions said he would do a "morning sweep" through the house to make sure none of the snakes had made it inside. That didn't always work. One day, he heard his wife scream from the laundry room, where she had almost stepped on a snake. He rushed into the room to find that she'd jumped onto a counter.

"I was terrified she was going to miscarry," he said.

They invited family as witnesses and snapped pictures.

At the height of the infestation, Sessions said he killed 42 snakes in one day before he decided he couldn't do it anymore. He had waged war against the snakes and "they won."

He and his wife had little recourse, though, when they decided to flee the home.

They had signed a document that noted the snake infestation. They said they had been assured by their real estate agent that the snakes were was just a story invented by the previous owners to leave their mortgage behind.

But the so-called Idaho snake house was no myth, according to the Sessionses, their neighbors, and the videos and photographs taken by them and past residents of the house. The couple said it seemed like almost everyone else in this tiny southeastern Idaho college town knew about it.

"I felt bad," said Dustin Chambers, a neighbor. "By the time we knew someone had bought it, they were already moving in. It was too late."

All of Rexburg, Chambers said, pretty much knows the property as the "snake house."

The Sessionses filed for bankruptcy. The house was foreclosed. They left in December 2009, the day after their daughter was born and just three months after moving in.

"We're not going to pay for house full of snakes," Ben Sessions said.

His wife, Amber, 27, said she felt like their family was starting to fall apart.

"It was just so stressful," she said. "It felt like we were living in Satan's lair, that's the only way to really explain it."

Several months ago, the house briefly went back on the market.

Now owned by JP Morgan Chase, it was listed at $114,900 in December 2010, according to Zillow.com, a real estate data firm. The price was reduced to $109,200 in early January, which was more than $60,000 below its estimated value. Then, Discovery Channel's "Animal Planet" featured the Sessionses' story in its "Infested" series.

The listing was removed and the home has stayed off the market while Chase decides what to do with it.

A Rexburg real estate company that was hired to sell the house referred all questions to a Chase spokeswoman in Seattle.

Darcy Donahoe-Wilmot did not return repeated phone calls from The Associated Press. But she did tell a business columnist for Dow Jones Newswires that the bank had contracted to have the snakes at the home trapped and released elsewhere.

Ben Sessions said that he has been diagnosed with snake-related post-traumatic stress disorder and that the house should be condemned.

"It's not right to continue to sell this home," Sessions said. He and his wife said they still have nightmares and haven't recovered financially.

The home was most likely built on a winter snake sanctuary, likely a snake den or hibernaculum, where snakes gather in large numbers to hibernate for the winter, said Rob Cavallaro, a wildlife biologist with the Idaho Department of Fish and Game.

In the spring and summer the snakes fan out across the wilds of southeastern Idaho, but as the days get shorter and cooler, the snakes return to the den in order to ball up for heat and to be accessible to each other for spring breeding.

Cavallaro has heard only of one other eastern Idaho home that was likely located on a snake den. There was also a bridge-widening project where workers ran into a hibernaculum, he said.

"It is an important site for the snakes," Cavallaro said. "Every now and then we build on them and it becomes a conflict."

Neal and Denise Ard previously lived in the home, and in 2006 they invited the local news station to come and film the buckets of snakes they had collected on the property. The video, which has 2.4 million views on YouTube, was taken before the Ards abandoned the home.

In March 2007, the Ards sued the couple who had sold them the home for $189,900 and the real estate agent who negotiated the sale, according to court documents. The complaint was dismissed a year later.

There have been some people who have looked at the house since the Sessionses moved out, neighbor Chambers said. One day, when a real estate agent was showing the property, a farmer who lives down the road stopped by to warn them, he said.

"Now, if anybody sees anybody, they kind of will let them know," Chambers said. "Just so that somebody else doesn't get caught in the same trap."