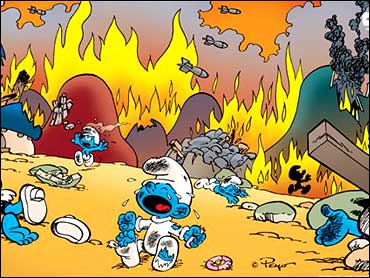 Smurfette is left for dead. Baby Smurf is left crying and orphaned as the Smurf's village is carpet bombed by warplanes — a horrific scene and imagery not normally associated with the lovable blue-skinned cartoon characters.

These are the scenes being shown as part of a new UNICEF ad-campaign on Belgian television.

"It's working. We are getting a lot of reactions and people are logging on to our Web site," UNICEF Belgium spokesman Philippe Henon said Tuesday.

The Belgian office of the U.N. children's fund said it has decided to use the creations of late Belgian artist Peyo to shock a complacent public into backing its fund-raising efforts for ex-child soldiers in Africa.

The 20-second video commercial clip now being shown on Belgian TV aims to show that war can happen in the most innocent of places, Henon said.

"We get reactions from all over the place," said Henon. "People are shocked and want to know the reasons behind this cartoon image."

The appeal is meant to raise money for UNICEF projects in Burundi, Congo and Sudan, Henon said. However, due to its graphic and disturbing scenes, this cartoon is not for everyone. The advertisement is aimed at an adult audience and is only shown after 9 p.m. to avoid upsetting young Smurfs fans.

The video is peacefully introduced by birds, butterflies and happy Smurfs playing and singing their theme song when suddenly out of the sky, bombs rain down onto their forest village, scattering Papa Smurf and the rest as their houses are set ablaze.

The bombs kill Smurfette leaving Baby Smurf orphaned and crying at the edge of a crater in the last scene of the video and finishing of with the text "don't let war destroy the children's world."

It calls on viewers to donate.

UNICEF traditionally uses real life images of playing and laughing children but decided to change it for something that would shock people, Henon said.

"We wanted to have lasting effect of our campaign, because we felt that in comparison to previous campaigns, the public is not easily motivated to do things for humanitarian causes and certainly not when it involved Africa or children in war," he said.

Henon added that UNICEF would never cross the line and film real-life war scenes in its appeals.

The UNICEF campaign was launched Friday with the Smurf TV spot and will last until April.

"We see so many images that we don't really react anymore," said Julie Lamoureux, account director at Publicis, an advertising agency that drew up the campaign for UNICEF Belgium. "In 35 seconds we wanted to show adults how awful war is by reaching them within their memories of childhood."

The Smurf ad will be followed by similar ad in November to promote UNICEF's "let children live in peace" campaign.