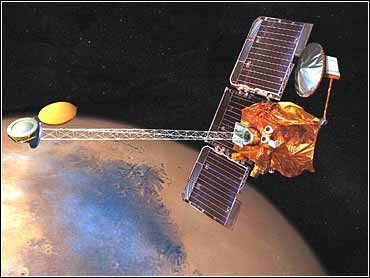 Three days after the tensely awaited launch of NASA's Mars Odyssey spacecraft, program director G. Scott Hubbard said the operation is proceeding as planned, and that the mission should help to answer the question of whether there is life on the Red Planet.

Hubbard spoke at the National Press Club in Washington on Tuesday, where he also said Odyssey's mission is to orbit Mars and look for signs of water, whether past or current. Scientists believe there may be liquid water underground on Mars, and there is strong evidence that water once flowed on the planet's surface.

Ultimately, NASA hopes to send a probe that will land on the Red Planet, collect samples, and bring them back to Earth for study. As for sending a man to Mars, Hubbard said that is still decades off, though he added it is something NASA would like to do.

In the year 2003 the first probe in a new mission, called the "Twin Rovers" will be launched, Hubbard said. The two-probe mission will be designed to land on the surface of Mars in hopes of verifying information gathered by Odyssey. Odyssey will help to choose landing sites for these two crafts.

Named after Arthur C. Clarke's science fiction novel and movie, 2001: A Space Odyssey, Mars Odyssey is quite possibly the most scrutinized spacecraft ever sent to the Red Planet. Saturday's successful liftoff marked the space agency's first launch to Mars since a pair of humiliating failures in 1999.

Mars Odyssey is scheduled to reach Mars on Oct. 24 and slip into orbit around the planet. For two-and-a-half years, it will study minerals in the rocks and measure chemical elements like hydrogen in a quest for water.

Odyssey's neutron spectrometer, which was developed by scientists at Los Alamos National Laboratory in northern New Mexico, will scan the planet's surface. Combined with data from a gamma ray detector on Earth, scientists hope to be able to map the presence of water or ice in the soil, said Los Alamos scientist Bill Feldman.

Perhaps just as important for NASA is showing the public that the Mars program is viable.

"There are a lot of people on the team who worked" on the failed 1999 missions, said George Pace, Odyssey's project manager for the Jet Propulsion Laboratory in Pasadena, Calif. "They want ome kind of redemption. They want a chance to show they can make this right."

In September 1999, the Mars Climate Orbiter ended up in pieces around Mars or smashed on the planet because engineers mixed up English and metric units of measurement. Just 10 weeks later, the Mars Polar Lander crash-landed on Mars and was lost, most likely because of a premature engine shutdown.

To avoid another fiasco, NASA spent millions of extra dollars on Odyssey, boosting the total mission cost to $297 million, and added dozens of extra sets of eyes to the project. About 22,000 parameters in the computer software, any of which could doom the mission if wrong, were double-checked.

The fact remains, though, that Mars is tricky to reach. NASA's success rate at Mars is about 60 percent. Counting Russia's failed efforts, the overall success rate is less than 30 percent.

"You never stop worrying about it. It's like having a kid," Hubbard has said. "You never quite crack the champagne."