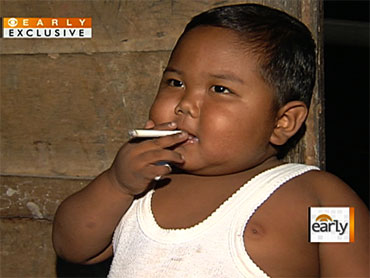 The chain-smoking Indonesian toddler who gained instant worldwide fame via a viral video of him puffing away has gone into rehab - and given up cigarettes.

But now, reports CBS News Correspondent Betty Nguyen, Aldi Suganda, 2, is heading home, and there's concern he may give in to temptation and resume smoking once he gets there.

The video of Aldi smoking sparked outrage. He was smoking up to 40 cigarettes a day.

And in July, a CBS News team traveled to the remote fishing village of Musi Banyuasin, on the Indonesian island of Sumatra in search of Aldi.

Our crew found him, cigarette in hand.

His mother, Diana, said she felt helpless in her efforts to breaking Aldi's two-four pack-a-day habit.

"I don't know of what will happen in the future," she said through an interpreter. " … We surely hope he will quit. … But what can we do but accept it is as it is?"

Given the intense interest in his story, "The Early Show" wanted to see how the child was doing, two months later.

It turns out Aldi and Diana mother were taken to the capital, Jakarta, for intensive medical and psychological treatment, a trip paid for by the local government.

Jakarta translates to "complete victory," which is just what Diana was hoping for. "I brought him here to stop smoking," she said. "I came to Jakarta for help."

The night before treatment began, Diana watched her child smoke what she hoped would be his last cigarette.

In the morning, despite his mother's optimism, Aldi wasn't happy when he arrived at the hospital and was denied a cigarette.

What followed would be hard for any parent to bear, as Aldi wailed and smashed his head on the floor.

Over the next two days, he underwent a battery of tests, including a chest X-ray and ultrasound on his heart and lungs. Results showed a thickening on the left wall of his heart.

"The youngest smokers found," says Aris Merdeka Sirait, CEO of the National Committee of Child Protection, "were 5 to 9 years-old. This year, we found that there are baby smokers, who start from a year old. He was also speaking through an interpreter.

Indonesia has long been a country with virtually no regulations of its tobacco industry, Nguyen points out. More than 30 percent of children there smoke a cigarette before the age of 10.

"Unhealthy children will be the future generation of our country," observed Sirait. " … It is genocide."

To try to limit his nicotine withdrawal symptoms, doctors had Aldi participate in play therapy, to keep his mind occupied.

"Through play therapy," child psychologist Kak Seto, also of the National Commission for Child Protection said through an interpreter, "we will lead him back to the beauty of childhood play. … If it can be done well, I am optimistic that Aldi will stop smoking."

"I hope he does not have any diseases, because he has now stopped smoking," Diana remarked when Aldi's rehab ended.

After nearly a month without smoking, the true test begins now -- as Aldi returns to his village, where hopes are high, but temptation is everywhere.

Aldi and Diana fly back to their home village Thursday. The agency that's been looking after his care will hand the responsibility back to the government of Aldi's home area, whose job it will be to make sure Aldi is properly cared for in future, and that he doesn't resume smoking.

Nguyen says Diana's been given tools by the doctors at the rehab center to equip her to handle Aldi, and keep him from beginning to smoke again.

It turns out, Nguyen added, the thickening of a wall of Aldi's heart is because he's obese, so his heart has to work harder, and not from the smoking, which doctors say hasn't affected his health - yet.

Schieffer: Romney must prove he's on the right