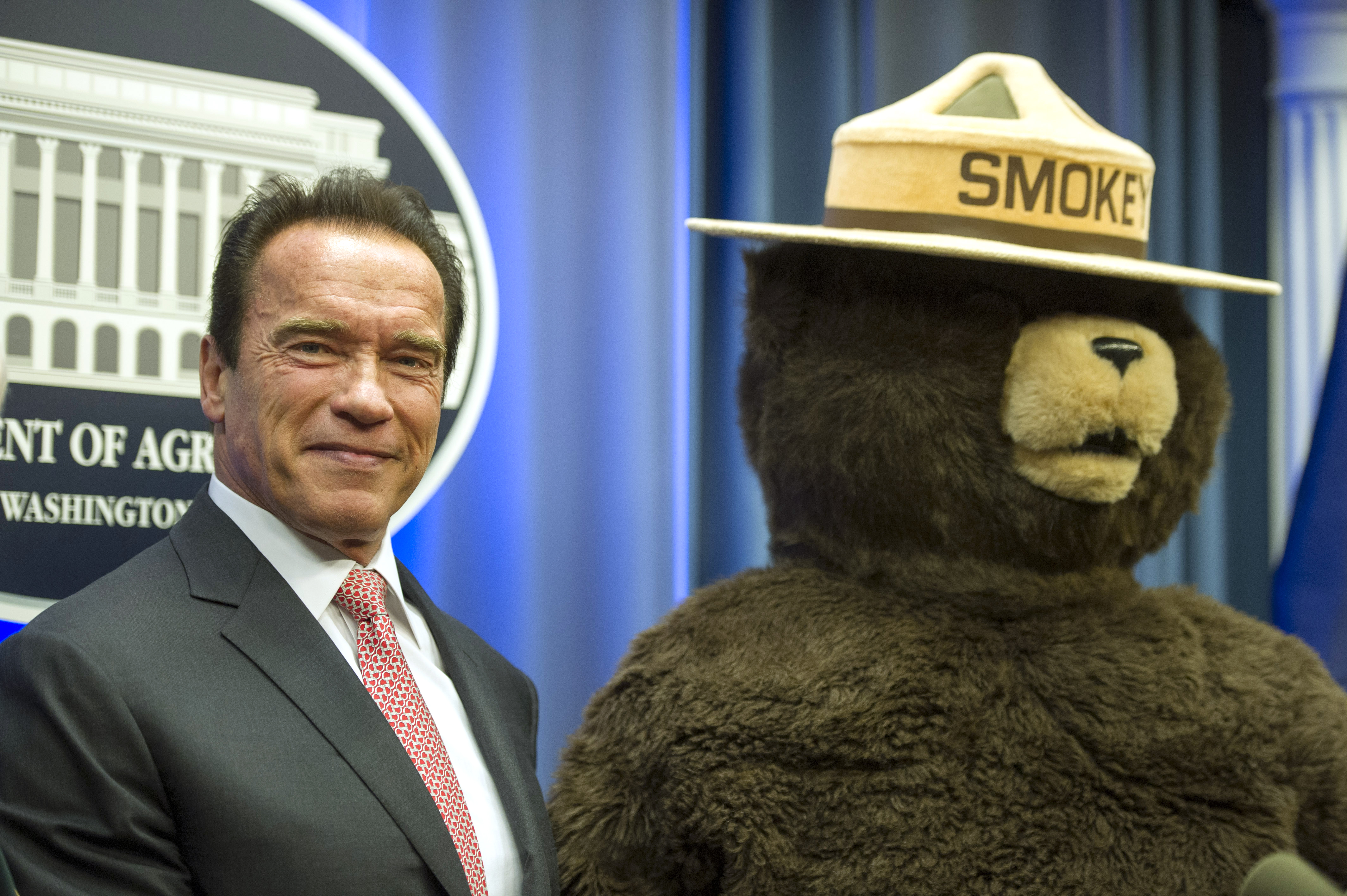 LOS ANGELES -- Smokey Bear is turning 70 on Saturday - but don't bring any candles to the party, please.

As the friendly, huggable bear with the brimmed hat and shovel enters his golden years, he's burning up Twitter. But his message of fire prevention through personal responsibility hasn't changed much.

Here are some little-known facts about Smokey Bear on his big day.

THE 'REAL' SMOKEY: Smokey Bear's nascent ad campaign got a boost in 1950 when a real bear cub that had been rescued from a New Mexico wildfire was nursed back to health and sent to the National Zoo in Washington, D.C., as the living Smokey.

STAYING POWER: Smokey Bear was created in 1944 because of fears that America's enemies would set forest fires while most U.S. firefighters were in battle overseas. When the war ended, Smokey stuck around - and he's now at the center of the longest-running public service announcement campaign in U.S. history. Research shows he is known by 96 percent of American adults and ranks near Mickey Mouse and Santa Claus for name recognition. His creation was a collaboration of the U.S. Forest Service, the National Association of State Foresters and the Ad Council.

A SOCIAL ANIMAL: Smokey's image has evolved over the decades to fit the latest media technology. When he first debuted, TV was in its infancy and posters were hand-drawn. Now, Smokey is a social media connoisseur and prolific blogger, with accounts on Facebook, Twitter (Smokey_Bear), Instagram, YouTube and Flickr. He has more than 300,000 friends on Facebook and 24,000 people follow him on Twitter. Fans can sign a virtual card and upload photos at www.smokeybear.com. People still like to write to Smokey the old-fashioned way, too. The imaginary bear got his own ZIP code (20252) in 1952 as his popularity soared and it was reactivated this summer.

A QUIET BEAR: Smokey traditionally never spoke in his public service messages except for his signature line (Only You Can Prevent Forest Fires). Now, social media has given him a new outlet - and he's chatty. "It turns out he does have a voice and it's very clever," said Peggy Conlon, president and CEO of the Ad Council. Still, Smokey's message is sometimes best relayed through silence. A series of YouTube videos created around his 70th birthday show Smokey giving silent bear hugs (#SmokeyBearHug) to campers who properly build and extinguish camp fires and safely dispose of used barbeque charcoal, among other things.

SMOKEY IN SPACE: In 2012, an American astronaut heading to the International Space Station chose Smokey Bear as his crew's mascot. NASA astronaut Joseph Acaba said that he hoped Smokey would help raise public awareness about the dangers posed by forest fires.

WHAT'S IN A NAME: Most people know the finger-pointing fire-safety fanatic as Smokey THE Bear, but in fact there is no "the" in the original name. In 1952, Steve Nelson and Jack Rollins wrote a song in his honor and added a "the" between "Smokey" and "Bear" to keep the rhythm flowing.

A BEAR IN THE CITY: In 2001, Smokey's public relations team changed his classic line to the more updated phrase, Only You Can Prevent Wildfires and revamped the campaign to address the growing threat of devastating wildfires in suburban and urban areas. Smokey hit the cities with a three-year "refreshed" campaign targeting casual adult hikers, bikers and campers and those living in urban areas adjacent to forest land.