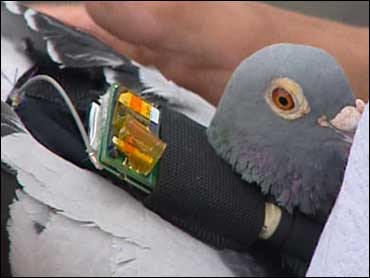 Internet research reveals two new blogs are created every second. But as CBS News correspondent Bill Whitaker reports, few can match the originality of the PigeonBlog.

"Blogging pigeons. I don't know; do you think that's what you see every day?" says creator Beatriz da Costa, an artist, engineer and professor at the University of California, Irvine, in smoggy southern California. "I was wondering if there was a way to address air pollution using living organisms of a sort."

Da Costa set out to discover whether lowly pigeons, often considered a public nuisance, could be enlisted to do some public good by monitoring air pollution with tiny tracking devices on their backs.

At first, da Costa's students thought the idea was — pardon the pun — bird-brained. But homing pigeon trainer Bob Matsuyama thought it just might work. "The big thing we had to do was get them used to flying with backpacks on their backs," says Matsuyama.

The team devised a feather-weight minipack with an antenna, a cell phone SIM card, global positioning system equipment and a pollution sensor. The GPS tracks the pigeon's exact location, the sensors pick up airborne pollutants and the information is text-messaged to the Web site.

"I don't want to be cheesy about it. I mean, they're birds," says da Costa. "But yes, they are reporting back information that's interesting and important to us. So I'm using the metaphor in that way of reporting and blogging it."

So the next time you see some pesky pigeons, don't shoo them — Google them, because these birds of a feather blog together.