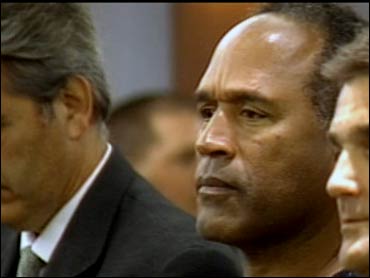 What O.J. Simpson wore when he was acquitted in 1995 of murdering his ex-wife and her friend was the suit seen around the world during one of the most watched televised moments in history.

But the Smithsonian Institution, America's repository of historical artifacts, rejected it Tuesday as inappropriate for their collection.

Announcement of the museum's snub came the morning after a California judge approved the donation as the solution to a 13-year court battle over the carefully tailored tan suit, white shirt and yellow and tan tie. The ensemble has been held by Simpson's former sports agent, Mike Gilbert.

Fred Goldman, the father of the man Simpson was accused of killing in 1994, had been fighting Gilbert for the suit, which Simpson has said was stolen from him.

The suit was indirectly responsible for Simpson's current predicament: The former NFL star is imprisoned in Nevada for a bungled effort to reclaim items of his memorabilia from a Las Vegas hotel room.

Simpson had been told the suit was in the room and was being offered for sale, along with other artifacts of his life. It turned out the suit wasn't there.

The Smithsonian announced its decision with a terse announcement on its Web site.

"The Smithsonian's National Museum of American History will not be collecting O.J. Simpson's suit," it said. "The decision was made by the museum's curators together with the director."

Gilbert, who has the suit in storage, said he was disappointed with the decision.

"Whether we like it or not, it's part of American history," he said. "I'm disappointed that they didn't wait to hear from me and consider my vision of how it should be displayed."

Attorney Ronald P. Slates, who represents Simpson, said he's keeping his client informed about the donation effort. Superior Court Judge Joseph S. Biderman consulted Simpson by phone Monday, then approved Gilbert's plan after Simpson said he would agree as long as no one made any money.

"I'm saddened by the fact that the foremost museum in America has refused this very important item in the history of American jurisprudence," Slates said. "Regardless of one's feelings about Mr. Simpson, his acquittal by a jury of his peers on Oct. 3, 1995, was of great significance and is widely talked about to this day."

Even then-President Bill Clinton watched on television when the jury announced the acquittal in the killing of Nicole Brown Simpson and Ronald Goldman after a yearlong trial.

The museum's spokeswoman, Linda St. Thomas, said curators consider several criteria for accepting donations, including whether an item has historical significance, whether it is needed to complete a collection or is needed for research.

"In this case, they knew it was not appropriate for the collection," she said.

Attorney David Cook, who represents Fred Goldman, said he was sure other institutions would want the suit.

"We're going to hang this suit in America's closet and there will be no lack of people who want it," Cook said. "It's a matter of finding the right fit."

He said he already has some ideas including two Washington, D.C., museums: the Newseum, which has a collection on historical news events, and the Museum of Crime and Punishment.

Slates said he may suggest that it go to the University of Southern California, where Simpson made his mark as a star football player.

Gilbert, who was placed in charge of facilitating the donation, said he would consider all suggestions. He was given 30 days to report back to the judge, and could receive another 30 days if an agreement hasn't been reached by then. He said the suit has a blood mark on the collar from when Simpson cut himself shaving, and some lipstick from when his sister hugged him.