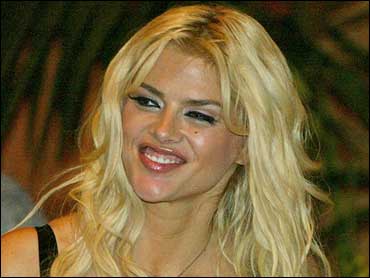 Even though the biological father of Anna Nicole Smith's daughter was confirmed to be Larry Birkhead, the bizarre tale of the former Guess model and Playboy Playmate refuses to go away.

Anna Nicole Smith's half-sister, Donna Hogan, released a book called "Train Wreck: The Life and Death of the Anna Nicole Smith" in which she reveals more strange tales about the woman with whom she shared a father.

Hogan refers to Smith as Vicky, her given name, and said that Smith had wanted a daughter for years, so much so that she even approached Hogan about adopting her daughter.

"I was a single parent with a daughter and pregnant again and she bugged me over and over again," Hogan told The Early Show co-anchor Hannah Storm. "She just said that she would take better care of my kids than I would because she had money, which really hurt. That was something that pushed me away from her. I was very hurt by it."

But with Dannielynn, Smith finally had a daughter of her own and DNA results confirmed Birkhead, not Smith's lawyer and companion Howard K. Stern, is the father. This comes as good news for Hogan who said that the baby would not be safe in Stern's care.

2"I don't think he ever showed concern for that baby before she was born, so why should I think so after?" Hogan said.

Hogan also feels that Smith's mother, Virgie Arthur, should be involved in Dannielynn's life, because her granddaughter is all Arthur has left of Smith, who passed away just over two months ago from an accidental drug overdose. Hogan says that Arthur protected Smith from her abusive father.

In addition, Hogan writes about Smith's extensive plastic surgeries including a double breast enhancement that made her so large that at one point, her bras had to be custom-made. That lead to back-pain and Hogan said Smith turned to prescription drugs.

"She had liposuction and her breasts done and several other little things, her gums and teeth," Hogan said.

Anna Nicole Smith: A Who's Who

According to Hogan, after Smith's husband, J. Howard Marshall II, died she became depressed and her drug problem worsened.

Critics have said that Hogan is trying to capitalize off her half-sister's death, but she says she wrote the book for closure.