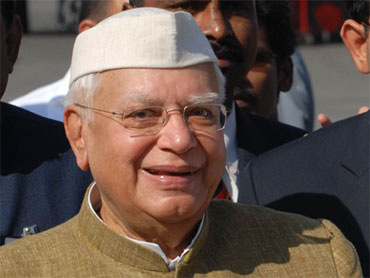 The new chairman of the board of Smith & Wesson's parent company resigned following reports that he committed a string of armed robberies in the 1950s and 1960s.

James Joseph Minder, 74, who had been an outside director of Smith & Wesson Holding Corp., said he submitted his resignation voluntarily at a directors meeting this week.

"I felt it was the best thing for the company, given the circumstances," Minder told The Republican newspaper in Springfield.

Company officials did not immediately return telephone calls seeking comment. The newspaper said the gunmaker was expected to name a replacement on Friday.

The resignation by Minder, who lives in Scottsdale, Ariz., came three weeks after The Arizona Republic reported that he had spent more than 10 years in Michigan prisons in the 1950s and 1960s for a string of armed robberies and an attempted prison escape.

Minder said he didn't disclose his criminal past to the other directors of the 150-year-old gun company prior to his election as chairman in mid-January.

"Nobody asked," he said, adding he had turned his life around in the 30 years since his release from prison.

Minder was named to Smith & Wesson's board after serving on the board of Saf-T-Hammer, the Scottsdale company that acquired Smith & Wesson in 2001.

Following his release from prison, Minder founded Spectrum Human Services, a nonprofit agency serving delinquent and disabled Michigan youths, and ran it for 20 years before retiring to Arizona in 1997.

In Scottsdale, he was president and chief operating officer of Amherst Consulting Co., a management consulting firm.