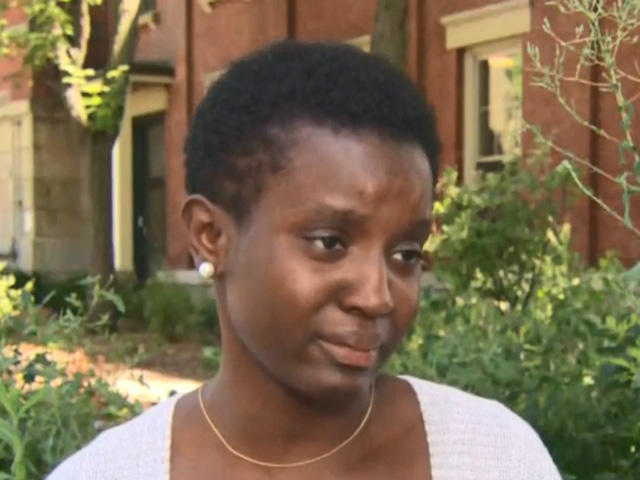 NORTHAMPTON, Mass. -- An employee who called police on a black Smith College student who was eating lunch in a common room on the western Massachusetts campus Tuesday has been placed on leave, school officials say. In a transcript of the call released by school officials Friday, the unidentified employee tells campus police dispatchers that the student seemed "out of place."

In a statement Friday, the college announced they have retained an outside law firm to "conduct a thorough, external investigation." The employee, who hasn't been identified, has been placed on leave pending the result, the school said.

The student, rising sophomore Oumou Kanoute, told CBS Boston she works at a summer program teaching chemistry to high school students for Smith's STEM program and was reading in the dining hall of the Tyler House dorm Tuesday.

"Next thing you know, I see the cop walk in with a Smith employee whom I've never seen before and the man said, 'We were wondering why you're here?"' Kanoute said.

Kanoute tells the officer she works on campus and was eating lunch and relaxing.

"Oh you're just taking a break? You're with one of the summer programs?" the officer responds.

Campus police found "nothing suspicious" about Kanoute's presence, Amy Hunter, the school's interim director of Inclusion, Diversity and Equity, said in a statement. A police report wasn't filed because the officer determined the report to be unfounded, according to the school.

In the transcript of the police call, the employee who made the report tells a dispatcher, "I was just walking through here in the front foyer of [redacted] and we have a person sitting there laying down in the living room area over here. I didn't approach her or anything but he seems to be out of place … umm … I don't see anybody in the building at this point and I don't know what he's doing in there, just laying on the couch."

The dispatcher asks for the caller's last name and says they will send someone to check it out.

According to the transcript, the responding officer calls back dispatch to report "all clear."

"That was a student relaxing in the living room," the officer tells the dispatcher. "They had lunch here. I guess and they decided to stay for a while."

Kanoute recorded the police encounter on her phone and posted video with her own text on Instagram and Facebook.

"No student of color should have to explain why they belong at prestigious white institutions," she wrote. "I worked my hardest to get into Smith, and I deserve to feel safe on my campus."

Kanoute said in the post that she was reading, not making noise or bothering anyone, and added: "All I did was be black."

While she spoke calmly to the officer in the video, she said in the post she had a "complete meltdown" after the incident.

"It just still upsets me to just talk about it because I don't even feel safe on my own campus and I'm away from home," Kanoute told CBS Boston through tears. "I'm the first in my family to go to college. I'm doing this not only for me but for my family, for my ancestors."

In a statement posted online, Hunter said the university "does not tolerate race- or gender-based discrimination" and that such behavior "can contribute to a climate of fear, hostility and exclusion that has no place in our community."

Smith president Kathleen McCartney issued a public apology to Kanoute and assured her "she belongs in all Smith spaces."

"This painful incident reminds us of the ongoing legacy of racism and bias in which people of color are targeted while simply going about the business of their daily lives," McCartney's statement read. "Building an inclusive, diverse and sustainable community is urgent and ongoing work."

McCartney said Smith staff members will be required to participate in mandatory anti-bias training beginning in the fall and the school would host a series of workshops for faculty and staff focused on "topics of identity, inclusion, bias-response and bias-prevention." She said the school's Office of Inclusion, Diversity and Equity would work with campus police to strengthen protocols by which they assess and respond for calls for assistance. Campus police are already trained on issues surrounding diversity, equity and inclusion and implicit bias, the school has said.

Kanoute told CBS Boston she appreciates the president's apology, but wants the identity of the caller released. "I want a public apology from that caller and I want them fired from the school," Kanoute said.

The school says they aren't releasing the employee's name because college policy requires records released to have references to involved parties removed. They say they won't release outcomes of the external investigation related to personnel matters, but will publicize and recommendations on "policies, procedures, or further community training that result."