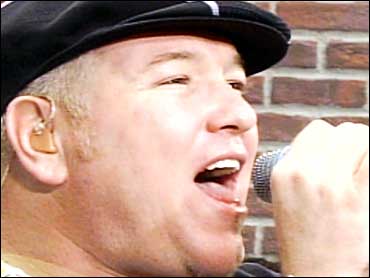 On Wednesday, The Early Show's special Save the Music performance featured the rock band Smash Mouth.

Many may be familiar with Smash Mouth's songs because they are widely used in television and radio commercials.

But the rock band is known for more than a few jingles. Smash Mouth sold more than 10 million albums in its eight-year career. Its hit single, "I'm a Believer," from the blockbuster movie, "Shrek," introduced a young audience to the Monkees classic.

Smash Mouth will be releasing a new album, "Get the Picture," on Aug. 5, 2003. Its newest single, "You're My Number One," was co-written by Neil Diamond.

The rock group donated an autographed guitar to be auctioned off on eBay for VH1's "Save the Music."

Recent budget cuts have put many music education programs at risk. From Providence to Portland, communities have reduced or eliminated public school music programs. This is occurring in spite of the growing body of research that documents the benefits of music education and some overwhelming public support. An astounding 95 percent of Americans believe that music is a key component in a child's well-rounded education, according to a 2003 Gallup Survey.

If you want to help keep music in your local schools, here's what you can do:
Donate an instrument - If you live in New York City, bring your instrument to The Early Show Plaza at 59th Street and Fifth Avenue, but there also are drop-off locations all around the country.

Bid on great stuff - Go to eBay where celebrities have donated various items. All proceeds go to the VH1 Save the Music Foundation.

Donate Money – Go to vh1savethemusic.com to make a cash contribution. Donations will be used to purchase new instrument.

Support your local programs – Help support public school music programs in your community. Visit the VH1 Save The Music Web site for tools and materials or go to supportmusic.com.

The VH1 Save The Music Foundation purchases new musical instruments to restore music education programs that have been cut because of budget reductions in the past or to save programs at risk of elimination due to lack of instruments. Christina Norman, general manager of VH1 Networks, says since its inception, Save The Music has restored music programs in more than 1,000 schools benefiting half a million children across the country.

For Smash Mouth lead singer Steve Harwell, music has been a way of having fun since he was a kid. He says, "I encourage all kids everywhere in every school to give it a shot. It's a fun time. I just want to help 'Save the Music,' so I want Mr. Bush out there to 'save the music' for all these kids so they have something to do, so they can be rock stars, too."

Steinway & Sons is doing its part too. President and CEO Bruce Stevens says, "We are donating one, 9-foot concert grand, that is the equivalent of $215,000." It is the centerpiece of the charity auction on eBay. The concert "D" series Steinway & Sons piano performed on during the Steinway & Sons' 150th anniversary concert, "A Celebration Of Music" presented by Chrysler, at Carnegie Hall in New York City this past weekend.

This one-of-a-kind instrument will be signed by the participating legendary music artists. Time Warner Cable is also participating as the local partner promoting the partnership with Steinway & Sons. The funds will be used to support music education in New York City public schools.

Harriet Novet of Time Warner Cable New York and New Jersey says, "Save the Music got its start here in New York City over six years ago, and we think that there's a direct link between a child's achievement in school and the learning of music literacy. And we think that it develops self-esteem, as well as developing a talent that the children might have for music. But there's a direct link between math and reading scores."

Since 1997, The VH1 Save The Music Foundation and Time Warner Cable have been working in partnership with the New York City Public Schools to restore instrumental music education programs.

Thus far, the partnership has provided $3,150,000 worth of new instruments, to restore music education programs in 121 schools. Hundreds of other schools have received refurbished instruments, worth more than $1 million, to supplement their programs.