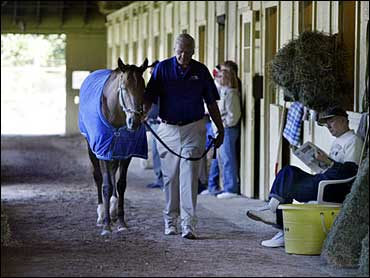 A Belmont Stakes victory for the Pennsylvania-bred horse would make him racing's first Triple Crown champion in 26 years, and boost the theee-year-old's career earnings to a record $13 million.

A loss would mark the first time in nine career races that Smarty Jones had failed to reach the winners circle - and create a Triple Crown of disappointment, making him the third horse in three years to lose at Belmont after winning the Kentucky Derby and the Preakness.

Funny Cide and War Emblem were unable to pull off the triple in the last two years.

A record crowd of more than 100,000 was expected at the 136th Belmont Stakes, the third and final jewel in racing's Triple Crown. More than eight hours before the race started, the parking lot was filled with fans waiting under gray skies and a light rain, hoping for a look at history.

Smarty Jones took a final gallop Friday at Belmont, and his trainer pronounced the horse ready for a run at the $5 million bonus for sweeping all three races.

"He was very strong," said John Servis after watching the workout. "He's ready."

CBSNews.com's Jarrett Murphy reports that the huge crowd observed a moment of silence when it was learned that former President Reagan had died.

With Smarty Jones installed as a prohibitive favorite, his biggest challenges in the nine-horse field were expected to come from Purge and Rock Hard Ten. Smarty Jones has twice defeated Purge, while Rock Hard Ten finished a distant second at the Preakness.

Eddington, the third place finisher at the Preakness, will also run in the Belmont.

A victory would make Smarty the biggest earning horse in North America, with a take of more than $13 million.

The colt had collected $7.4 million heading into the Belmont, including a $5 million bonus for winning the Kentucky Derby, Arkansas Derby and Rebel Stakes.

The Belmont purse is $1 million, and Visa would award an additional $5 million to Smarty's owners for sweeping the Kentucky Derby, Preakness and Belmont.

Bettors looking for a sign could check the Belmont paddock, where Smarty was stabled in the same barn that held 1973 Triple Crown winner Secretariat.

Sir Barton was the first Triple Crown winner in 1919.

Smarty's back story is began far from the New York spotlight, in the obscurity of small-time, suburban Philadelphia Park.

His owner, car dealer Roy Chapman, watches the races from a wheelchair while taking air from an oxygen tank. Jockey Stewart Elliott is a high school dropout who overcame an alcohol problem.

Smarty's first trainer and his wife were killed by her son, who is currently serving a 28-year prison term. The December 2001 slayings nearly convinced Chapman to get out of the horse racing business entirely.

And while prepping for his first race last year, Smarty suffered a potentially fatal injury when he smashed his head into the starting gate and fractured his skull.

But all the bad luck dissipated once Smarty stepped into the starting gate at Churchill Downs, winning by nearly three lengths.