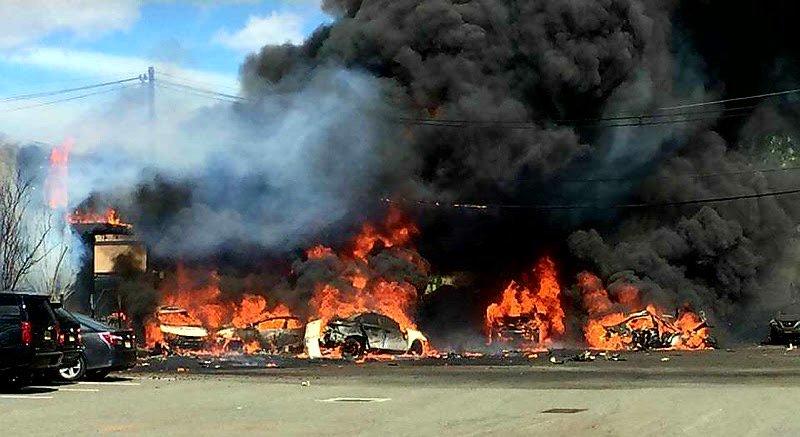 The Federal Aviation Administration said the plane, a Learjet 35 flying from Philadelphia, crashed at 3:30 p.m. Monday while attempting to land at Teterboro Airport.

Carlstadt Police Department officials told CBS News that two flight crew members were killed in the crash. They said there were no passengers on-board.

The plane struck a warehouse, leaving several buildings engulfed in flames, officials said. A thick plume of smoke was seen rising from the site of the crash.

Emergency responders reached the scene a short time later and were working to extinguish the blaze.

The plane crashed into a building in an industrial area, said Joe Orlando, a spokesman for the town of Carlstadt.

He said it crashed next to a township facility, but no one in that building was harmed inside. He said pieces of melted engine could be seen in the wreckage, along with wheels and part of the fuselage.

Steve Case, an entrepreneur and co-founder of AOL, wrote in an Instagram post that the plane appeared to have missed a turn and crashed a few hundred yards from the airport. He was aboard another plane at the airport at the time.

The cause of the crash is under investigation. But the National Weather Service warned of strong winds of 15 to 25 mph with gusts up to 45 mph just minutes before the crash.