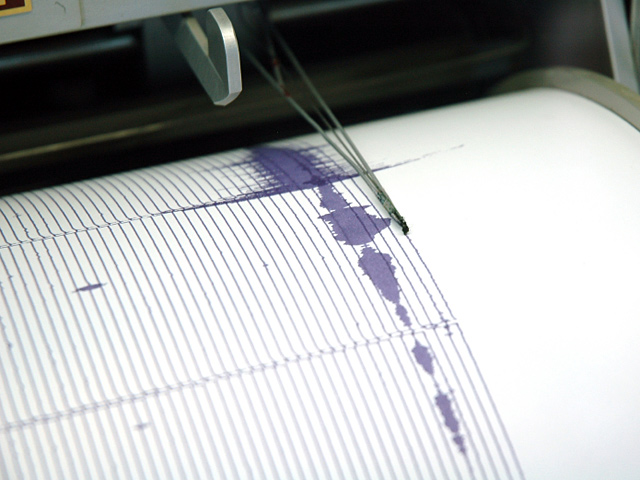 PORTLAND, Maine Patrons of a pizza parlor near the epicenter of an earthquake in southern Maine may not have known what was happening. But the shaking building was enough to send all 20 of them skedaddling outside.

"It was loudest bang you ever heard in your life. We actually thought it was an explosion of some type," said Jessica Hill, owner of Waterboro House of Pizza. "The back door and door to the basement blew open," she said.

The earthquake that hit southern Maine Tuesday night and was felt in New England states as far away as Connecticut caused no apparent damage or injuries, but it rattled residents throughout the region.

The U.S. Geological Survey said the 4.0 magnitude quake hit around 7:12 p.m. and its epicenter, about 3 miles west of Hollis Center, Maine, was about 3 miles deep. That location is about 20 miles west of Portland. The quake was first estimated to be 4.6 magnitude but was later downgraded.

In Saco, Sue Hadiaris said, "The whole house shook. ...It was very unnerving because you could feel the floor shaking. There was a queasy feeling."

Afterward, Hadiaris called her 15-year-old niece in Falmouth to make sure she was safe. "She said, 'We can cross that off our bucket list. We've lived through an earthquake,'" Hadiaris said.

Earthquakes are rare in New England but they're not unheard of.

In 2006 there was a series of earthquakes around Maine's Acadia National Park. The strongest earthquake recorded in Maine occurred in 1904 in the Eastport area, near the state's eastern border with Canada according to the Weston Observatory at Boston College. It had an estimated magnitude of 5.7 to 5.9.

The Seabrook Station nuclear plant, about 63 miles away in New Hampshire, declared an unusual event — the lowest of four emergency classifications — but said it was not affected. The plant has been offline for refueling.

"There has been no impact at all to the plant from the earthquake and our refueling maintenance activities have not been affected," said Alan Griffith, spokesman for Next EnergyEra Seabrook Station.

Jim Van Dongen, public information officer for the New Hampshire Department of Safety said New Hampshire 911 got about 1,000 calls in the first hour after the quake, but they later dropped off. He said no major damage was reported.

Brief, but noticeable shaking was felt in downtown Boston and the surrounding area.

Edward Conti, who lives in a four-story apartment building in Cambridge, Mass., he was watching television when "it sounded like a car crash. Then there was another boom-boom. It was no small thing." Conti said there was no damage.

In Melrose, just north of Boston, Peter Ward said the shaking he felt seemed to last about four seconds. "It felt like a big gust of wind shaking the house. I don't want to overstate it, but the glass did rattle a little," he said.

Lynette Miller, a spokeswoman for the Maine Emergency Management Agency, said her dogs started barking several seconds before the quake on Tuesday. "It was several seconds of good shaking but nothing falling down," Miller said from her home in Readfield, about 60 miles north of Portland.

In Portland, Abbie Miller had just turned on the aging furnace in her house for the first time this season. "An hour later, things started shaking and it sounded almost like a train coming through. I thought my furnace was going to blow," she said.

East Coast quakes are rarely strong enough to be felt over a wide area. A quake of magnitude 5.8 on Aug. 23, 2011, was centered in Virginia and felt all along the coast, including in New York City and Boston. Experts say the region's geology can make the effects felt in an area up to 10 times larger than quakes of similar size on the West Coast.