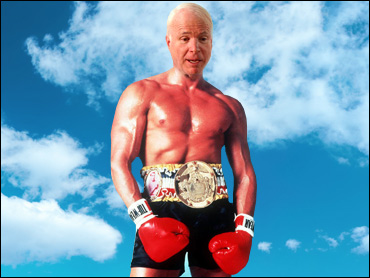 (CBS/AP)
In a showdown between Rocky Balboa and Walker, Texas Ranger, who would win?

That's something that may have crossed the minds of Republican presidential contenders Mike Huckabee and John McCain.

Huckabee has support from Chuck Norris.

And just today, McCain got an endorsement from Sylvester Stallone.

Says CBS News White House correspondent Mark Knoller: "Once Vin Diesel declares for a candidate, we can have a three-way presidential slam fest."