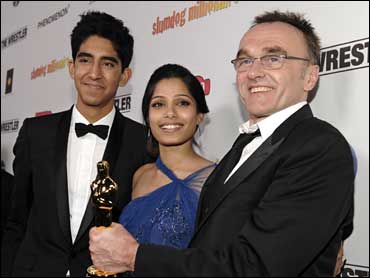 "Slumdog Millionaire" took the best-picture Academy Award and seven other Oscars on Sunday, including director for Danny Boyle, whose ghetto-to-glory story paralleled the film's unlikely rise to Hollywood's summit.

A story of hope amid squalor in Mumbai, India, "Slumdog Millionaire" came in with 10 nominations, its eight wins including adapted screenplay, cinematography, editing and both music Oscars (score and song).

"Just to say to Mumbai, all of you who helped us make the film and all of those of you who didn't, thank you very much. You dwarf even this guy," Boyle said, holding up his directing Oscar.

The filmmakers accepted the best-picture trophy surrounded by both the adult professional actors who appeared among the cast of relative unknowns and some of the children Boyle cast from the slums of Mumbai.

The film follows the travails and triumphs of Jamal, an orphan who artfully dodges a criminal gang that mutilates children to make them more pitiable beggars. Jamal witnesses his mother's violent death, endures police torture and struggles with betrayal by his brother, while single-mindedly hoping to reunite with the lost love of his childhood.

Fate rewards Jamal, whose story unfolds through flashbacks as he recalls how he came to know the answers that made him a champion on India's version of "Who Wants to Be a Millionaire."

As he took the stage to accept his prize for playing slain gay-rights pioneer Harvey Milk, Penn gleefully told the crowd: "You commie, homo-loving sons of guns." (Click here for highlights of all the night's speeches.)

He followed with condemnation of anti-gay protesters who demonstrated near the Oscar site and comments about California's recent vote to ban gay marriage.

"For those who saw the signs of hatred as our cars drove in tonight, I think it's a good time for those who voted for the ban against gay marriage to sit and reflect on their great shame and their shame in their grandchildren's eyes if they continue that support," Penn said. "We've got to have equal rights for everyone."

For his demented reinvention of Batman villain the Joker, Ledger became only the second actor ever to win posthumously, his triumph coming exactly 13 months after his death from an accidental overdose of prescription drugs.

His Oscar for the Warner Bros. blockbuster was accepted by Ledger's parents and sister on behalf of the actor's 3-year-old daughter, Matilda.

"I have to say this is ever so humbling, just being amongst such wonderful people in such a wonderful industry," said his father, Kim Ledger. "We'd like to thank the academy for recognizing our son's amazing work, Warner Bros., and Christopher Nolan in particular for allowing Heath the creative license to develop and explore this crazy Joker character."

Since his death, the 28-year-old Ledger has gained a mythic aura akin to James Dean, another rising star who died well before his time.

The Joker was his final completed role, a casting choice that initially drew scorn from fans who thought Ledger would not be up to the task given Jack Nicholson's gleefully campy rendition of the character in 1989's "Batman."

In the months before Ledger's death, buzz on his wickedly chaotic performance swelled as marketing for the movie centered on the Joker and the perverted clown makeup he hid behind.

Ledger's death fanned a frenzy of anticipation for "The Dark Knight," which had a record $158.4 million opening weekend last summer.

The previous posthumous Oscar recipient was Peter Finch, who won best actor for 1976's "Network" two months after his death.

Cruz triumphed as a woman in a steamy three-way affair with her ex-husband and an American woman in Woody Allen's romance.

"Has anybody ever fainted here? Because I might be the first one," Cruz said, who went on with warm thanks to Allen. "Thank you, Woody, for trusting me with this beautiful character. Thank you for having written all these years some of the greatest characters for women."

"OK, that fainting thing, Penelope," Winslet joked later as she accepted her best-actress prize for "The Reader," in which she plays a former concentration camp guard in an affair with a teen. "I'd be lying if I haven't made a version of this speech before. I think I was probably 8 years old and staring into the bathroom mirror, and this would be a shampoo bottle. But it's not a shampoo bottle now."

It was Winslet's first win after five previous losses.

"Slumdog" writer Simon Beaufoy, who adapted the script from Vikas Swarup's novel "Q&A," said there are places he never could imagine being.

"For me, it's the moon, the South Pole, the Miss World podium, and here," Beaufoy said.

The epic love story "The Curious Case of Benjamin Button," which led with 13 nominations, had three wins, for visual effects, art direction and makeup.

"The Dark Knight" had a second win, for sound editing.

"If Harvey had not been taken from us 30 years ago, I think he would want me to say to all the gay and lesbian kids out there tonight who have been told they are less than by the churches, by the government, by their families, that you are beautiful, wonderful creatures of value, and that no matter what anyone tells you, God does love you and that very soon, I promise you, you will have equal rights, federally, across this great nation of ours," Black said.

"Man on Wire," James Marsh's examination of tight-rope walker Philippe Petit's dazzling stroll between the towers of the World Trade Center in 1974, was chosen as best documentary.

It was a much different style for the Oscars as each past recipient offered personal tributes to one of the nominees, without clips of the nominated performances. Awards usually are done in chit-chat style between a couple of celebrity presenters.

After last year's Oscars delivered their worst TV ratings ever, producers this time aimed to liven up the show with some surprises and new ways of presenting awards. Rather than hiring a comedian such as past hosts Jon Stewart or Chris Rock, the producers went with actor and song-and-dance man Hugh Jackman, who has been host of Broadway's Tony Awards.

Instead of the usual standup routine, Jackman did an engaging musical number to open the show, saluting nominated films with a clever tribute.

Jackman later did a medley staged by his "Australia" director Baz Luhrmann with such performers as Beyonce Knowles and "High School Musical" stars Vanessa Hudgens and Zac Efron.

"Slumdog Millionaire" went into the evening after a run of prizes from earlier film honors.

The film nearly got lost in the shuffle as Warner Bros. folded its art-house banner, Warner Independent, which had been slated to distribute "Slumdog Millionaire." It was rescued from the direct-to-video scrap heap when Fox Searchlight stepped in to release the film.

"Slumdog" composer A.R. Rahman, a dual Oscar winner for the score and song, said the movie was about "optimism and the power of hope."

"All my life, I've had a choice of hate and love," Rahman said. "I chose love, and I'm here.
By AP Movie Writer David Germain