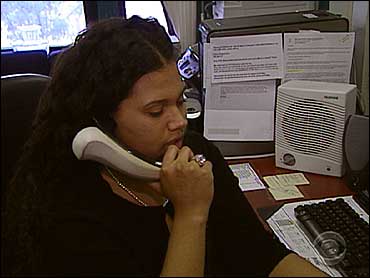 Teenager Sokleang Keo was fortunate to find work this summer, taking orders at a Chinese restaurant in Lynn, Massachusetts.

"You want that with pork fried rice, right," she asks a customer.

With her mother's help, Charlene Fernandez also landed a job in Lynn - as a receptionist - which she feels "very lucky" for.

"There aren't any jobs available," she says.

Both teenagers know how hard it is to get hired right now - just one in three teens will work this summer, reports CBS News correspondent Anthony Mason.

A year ago, 7 million Americans were unemployed. Today, 8.5 million are out of work. And without government hiring, those numbers would be worse.

"When you take the government out of the picture, it's much darker," says Mark Zandi, chief economist at Moody's Economy.com. "We've been losing jobs since last November - some 600,000."

Pat Driscoll, who runs Girls, Inc., in Lynn, Mass., says she usually finds jobs for 40 or 50 teenagers every summer. But she's placed just about 25 this year.

And when companies do hire, they're choosing older workers instead.

"They're taking the jobs even at fast food places," says Driscoll.

A slow motion recession is leading to a steady bleeding of the job market, says economist Ethan Harri.

"Unfortunately, I think it's a long slog ahead for the labor market. I think people are facing a tough job situation for the next year."

When asked if they worry about getting a job after college, both Keo and Fernandez echoed those concerns.

"Yes!" they cried in unison.

Because right now, this economy isn't cooking up jobs in short order.