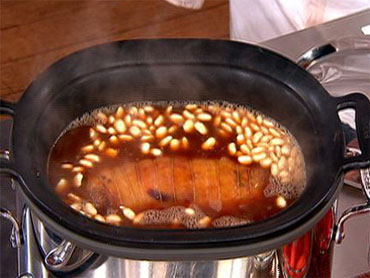 Iconic chefs Thomas Keller and Daniel Boulud are leading the American team at the Bocuse d'Or, a prestigious, fierce worldwide culinary competition that the United States has participated for more than 20 years, but never won.

Keller is executive chef and owner of California's "Per Se" and "French Laundry, as well as the author of the cookbook "Ad hoc at Home."

On "The Early Show" Monday, they shared a recipe for a mouth-watering, one-pot, slow-cooked lamb meal anyone can make at home: Pure Bred Lamb with Cannellini Beans and Garden Vegetables.

It can be prepped ahead of time and gets better with age...and it's easy cleanup and a fantastic flavor.

They say they're going to make lamb at Bocuse d'Or - though not this particular dish. They won't let anyone in on which dish they'll prep there!

4 each Roma Tomatoes, peeled and quartered
6 each Sweet Carrots, Pelled and cut into 1/2" dice
10 each Young Bulb Onions, Peeled with Root End Attached
15 each Garlic Cloves, peeled and split with germ removed
20 each Small White Turnips

For the roux, in a small sauce pan, melt the butter on low heat. Incorporate the flour until fully combined, then place in an oven for 15 minutes at 325 degrees.

Separately, using a pan large enough to fit the lamb shoulder, cover the bottom with 1/4" layer of canola oil and heat until the oil shimmers. Season the shoulder generously with salt and brown.

After the first 3 hours have passed, add the tomatoes, carrots, onions, garlic and turnips, and continue to cook for the remaining 2 hours.

Using a large pot with a wide surface area, cover the bottom with 1/4" layer of canola oil and heat until oil shimmers. Ensure bones are both trim and dry and brown in the hot oil, allowing bones to brown well before moving to the next step. Deglaze with 1 cup of water and continue to heat until liquid has mostly evaporated and the bones have re-caramelized.

Add onion, carrots and leeks and continue to heat until browned. Add tomatoes and aromatics and cook down to marmalade consistency. Add water and cook for 45 minutes. Skim occasionally to remove impurities. Strain through cheese cloth.