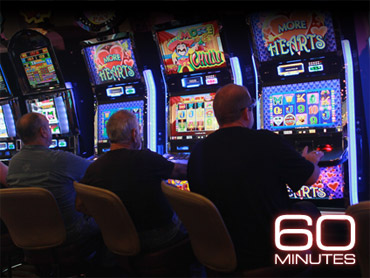 It wasn't that long ago that if you wanted to gamble, you had to travel a long way. Today, to shoot craps or play slots, all you have to do is get in your car: there's probably a casino in your state, or right next door.

There is now casino gambling now in 38 states, which use the revenue from gambling to help solve their bloated budget deficits.

The main attraction at these gambling halls is now the new slot machines - there are close to 850,000 of them in the United States, twice the number of ATMs.

We Americans spend more money on slots than on movies, baseball and theme parks combined.

But with the modern slot machines, there is a greater potential for a dangerous side effect: gambling addiction, as more people are addicted to slots than any other form of gambling.


Playing the Odds
If you're casino bound, remember, the house always has the upper hand, but there are ways to increase your odds of winning. And ways to avoid becoming a "problem gambler."

Old fashioned slot machines let gamblers pull the handle and hope for three of a kind, but the modern slots are like high tech video games that play music and scenes from TV shows.

You can play hundreds of lines at once and instead of pulling a handle, you bet by pushing buttons, which means each bet can be completed in as little as three and a half seconds. It looks like great fun, but it can be dangerously addictive.

"Whether or not it's their intention, the gambling industry is designing machines that can addict people," MIT anthropology Professor Natasha Schull told "60 Minutes" correspondent Lesley Stahl.

Schull has studied gambling addiction for over 15 years. She has interviewed gamblers, casino owners and slot machine designers.

"What addiction really has to do is with the speed of rewards. And these machines, if they're packing 1,200 hands per hour into play, you could see that as being exposed to a higher dose," Schull said.

"A higher dose," says Schull, because all that speed means more bets and that means more excitement.

And no machine is better for that than the "penny slot," the most popular game on the casino floor. Because the bets are small, you can place hundreds of them at a time.

"I found that the machines were wonderful. I loved the excitement. I loved the people, I loved the camaraderie, the high fives when you win. It was just very exciting," Sandi Hall told Stahl.

Hall lives only a short drive from thousands of slot machines in Rhode Island and Connecticut. Married with two daughters, she worked in a bookstore, and used to look at the casinos as an entertaining break. But eventually she was playing slots so much, she burned through her retirement funds.

"Lies just manufacture themselves. You didn't even have to think about it," Marilyn Lancelot, another slot addict, told Stahl.

Lancelot ended up embezzling over a quarter million dollars from her employer in Phoenix, Ariz. "My daughters lived two houses away, they did not know I was stealing money or gambling until one day, seven police cars drove into my yard and took me away in handcuffs. That's how they found out," she remembered.

"This is gambling for gambling sake, and the aim is not to win a jackpot," Natasha Schull said.

Schull is not talking about most people who go to casinos - she's only taking about addicted gamblers.

"Are you saying they would rather stay in the game than win the money?" Stahl asked.

"Not only am I saying that, but I found instances where gamblers who won a jackpot then became irritated because it stopped the flow of play," Schull replied.

Researchers at the University of Waterloo in Canada measured how players respond physiologically while they gamble, and showed that the new machines can make them think they're winning even when they're not.

The gambler almost always gets some money back: if he puts in a dollar, he might get back 50 cents. But the sounds and flickering lights trick his brain into thinking he came out ahead.

The constant feeling of winning creates so much pleasure, says Schull, that regular players can slip into a trance-like state, a place she calls the "zone."

"One gambler told me that when he's in the zone he couldn't remember his children's name," Schull said.

"You go into that trance, that zone, that box. Nobody can touch you. You have escaped from reality. No one can ask you for anything," Sandi Hall explained.

"When you sat in front of those machines, did you get into the zone? Did you have a buzz?" Stahl asked Marilyn Lancelot.

"I was having a love affair with that machine. That was my love. If anybody came it near it, touched it, 'Back off. Don't touch my machine.' It was the same as a kiss from a lover," she replied. "It was sweet. Sweet."

And yet not everyone is convinced the machines addict people. Listen to Dr. Howard Shaffer, the director of the Harvard Medical School Division on Addictions, the man the gambling industry loves to quote.

"But at one point you said that slot machines were the 'crack cocaine' of gambling," Stahl pointed out. "And how does that square with what you're telling me today?"

"Yeah, but nobody's going to sit here and try to tell me crack cocaine isn't addictive. And if this is like crack cocaine, the conclusion is it's addictive," Stahl said.

"I don't come to the same conclusion," Shaffer replied.

"How could you not?" Stahl asked.

"Because a majority of people that have used cocaine have not developed cocaine addiction. Only a small minority have, and the same would be true with gambling," he replied.

The problem is that that small minority that does get addicted is hit hard.

"You are getting a little dose of gambling in your brain every three seconds. It's a gambling IV and there's a 'drip, drip, drip,'" Dr. Robert Breen told Stahl.

Drs. Breen and Henry Lesieur are gambling addiction specialists at Rhode Island Hospital. They've treated 1,300 slot addicts who, when they try to stop, look like heroin addicts in withdrawal.

"And they're coming in and they're quite literally, they have shakes," Dr. Lesieur explained. "They're physically having these responses. And you tell yourself: they gotta be on something and it turns out they're withdrawing from the gambling."

According to Lesieur, it's slots in particular.

And yet state after state is turning to slots as an easy way to raise revenue and increase jobs. And no state has been more aggressive in luring gaming in the last few years than Pennsylvania, where the opening of the "SugarHouse" in September made Philadelphia the largest U.S. city to house a casino.

So far there are ten gambling halls in the state, with plans for 61,000 slot machines. An 11th casino, on the drawing board, would be near the main entrance to the Gettysburg National Battlefield.

Governor Ed Rendell, who's about to leave office, championed the casinos. "Look, gambling is not anything we should say, 'Oh, thank the Lord, we have gambling.' But it is a decent way to raise revenue where the upsides that's produced is significantly better than any downside that comes from it," he told Stahl.

"You said there was downsides to gaming. What are they?" Stahl asked.

"So why not lose it here," Stahl remarked.

"Well if they were going to lose it anyway, let's get the upside. We were getting all the downside and none of the upside," Rendell said.

The upside, he says, is the $1 billion the state got in gambling revenue last year, which was used to provide a $200-a-home property tax reduction, plus more relief for senior citizens.

"People have been gambling since organized society was formed on the banks of the Tigris and Euphrates. They were gambling. And they will gamble as long as there's life on this planet. And that's a fact," Rendell told Stahl.

"No one is saying that people can't gamble. This is about government using gambling to prey on human weakness for profit," Les Bernal, who heads the national organization "Stop Predatory Gambling," told Stahl.

Bernal and Massachusetts State Senator Sue Tucker have been fighting a move to bring casinos and slot parlors to the Bay State.

"Well but you have a situation where states are desperate, they're way over budget, they have to find revenue somewhere. They know people will gamble," Stahl pointed out.

"As a revenue raiser it defies every principle. It's regressive. In other words, it takes far more money out of lower income people's pockets than higher income. It is cannibalistic. In other words, it eats other forms of revenue. When you have your citizens dumping two billion dollars down the slots they're not buying a new car, and you lose that tax," State Sen. Tucker said.

"You don't listen. Anyone who has that bent would be doing it in other places had Pennsylvania not legalized gambling," Rendell argued.

"The counter argument is that you're creating new gamblers. And lots of new gamblers," Stahl said.

"Well, 'cause it's down the street," Stahl said.

"Those people play the lottery. They bet on football. How much money is bet on the Super Bowl," Rendell said.

"Let me answer this. I've known of for two or three decades, you're a very smart person," Rendell said.

"But not now," Stahl remarked.

"But you're not getting it," Rendell replied.

"You're not getting it. Those people would lose that money anyway. Don't you understand?" Rendell replied.

Our pressing him on this point led to an angry response from Rendell: "You guys don't get that. You're simpletons. You're idiots if you don't get that!"

We couldn't figure out why all the emotion. But his main point was that gambling is good entertainment, and people should be allowed to make their own decisions about it. But since the first casino opened in Pennsylvania five years ago, calls to gambling addiction hotlines in the state have tripled.

Sandi Hall says her problems didn't start until three casinos opened near her. "I cannot read my local newspaper without having full-page ads of upcoming events and slot play, with free this and free that. The exposure is phenomenal because of the proximity of three casinos," she said.

"But that's a lot of people," Stahl remarked.

"That's the group industry wants," Tucker replied. "They want the 75 percent that can get on the T and go to a nearby casino and get in trouble with gambling. That's the playbook."

Nowhere to Go: Mentally ill youth in crisis
Thanks for reading CBS NEWS.
Create your free account or log in
for more features.
View CBS News In
CBS News App Open
Chrome Safari Continue
Be the first to know
Get browser notifications for breaking news, live events, and exclusive reporting.