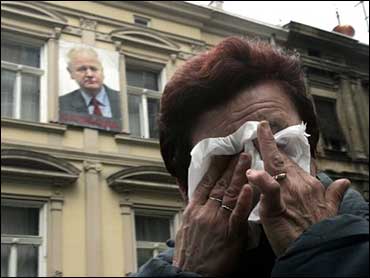 Former Yugoslav leader Slobodan Milosevic, the so-called "butcher of the Balkans" being tried for war crimes after orchestrating a decade of bloodshed that killed 250,000 people and broke up his country, was found dead Saturday in his prison cell. He was 64.

Milosevic, who suffered chronic heart ailments and high blood pressure, apparently died of natural causes and was found in his bed, the U.N. tribunal said, without giving an exact time of death.

He had been examined following frequent complaints of fatigue or ill health that delayed his trial, but the tribunal could not immediately say when his last medical checkup was. All detainees at the center in Scheveningen are checked by a guard every half hour.

The tribunal said Milosevic's family had been informed of his death, which came nearly five years after he was arrested, then extradited to The Hague.

Chief U.N. war crimes prosecutor Carla Del Ponte said she regretted Milosevic's death because she believed she would have won his conviction.

"I also regret it for the victims, the thousands of victims, who have been waiting for justice," Del Ponte told German-language Swiss Television DRS while visiting her native Switzerland.

His wife, Mirjana Markovic, who was often accused of being the power behind the scenes during her husband's autocratic rule, has been in self-imposed exile in Russia since 2003. His son, Marko, also lives in Russia, and his daughter, Marija, lives in Montenegro. Milosevic was regularly visited by his wife and other family members.

Borislav Milosevic, who lives in Moscow, blamed the U.N tribunal for causing his younger brother's death by refusing him medical treatment in Russia.

"All responsibility for this lies on the shoulders of the international tribunal. He asked for treatment several months ago, they knew this," he told The Associated Press. "They drove him to this as they didn't want to let him out alive."

Milosevic asked the court in December to let him go to Moscow for treatment. But the tribunal refused, despite assurances from Russia that Milosevic would return to finish his trial.

The White House said it was waiting for more information.

"We have seen the news that Slobodan Milosevic has died in his prison in The Hague," spokesman Blair Jones said. "We do not have all the details yet."

U.S. State Department acting spokesman Tom Casey said "the tribunal will be looking into the circumstances" of Milosevic's death.

The tribunal said it would conduct a full inquiry, including an autopsy on Sunday and toxicological examination. A pathologist from Serbia-Montenegro will observe the autopsy.

But Borislav Milosevic said his family does not trust the U.N. tribunal to conduct that autopsy impartially.

Slobodan Milosevic has been on trial since February 2002, defending himself against 66 counts of crimes, including genocide, in Croatia, Bosnia and Kosovo. He was the first sitting head of state ever to be indicted for such crimes.

He was accused of orchestrating a brutal campaign of ethnic cleansing against non-Serbs during the collapse of the Yugoslav federation — his attempt to link Serbia with Serb-dominated areas of Croatia and Bosnia to create a new Greater Serbia.

Supporters in Milosevic's homeland declared his death a "huge loss," while citizens of Bosnia, Croatia and Kosovo said his death brought some justice to his victims.

"Finally, we have some reason to smile. God is fair," said Hajra Catic, who heads an association of women that lost their loved ones in the 1995 massacre of 8,000 Muslims in the eastern Srebrenica enclave by Serb troops.

Milosevic spent much of the time granted for his defense fighting allegations of atrocities in Kosovo that took up just one-third of his indictment. He also faced charges of genocide in Bosnia for allegedly overseeing the Srebrenica slaughter — the worst massacre on European soil since World War II.

The trial was recessed last week to await his next defense witness. Milosevic also was waiting for a court decision on his request to subpoena former President Clinton as a witness. He was due to complete his defense this summer.

Steven Kay, a British attorney assigned to represent Milosevic, said Saturday the former Serb leader would not have fled and was not suicidal.

"He said to me: 'I haven't taken on all this work just to walk away from it and not come back. I want to see this case through,"' Kay told the British Broadcasting Corp.

Milosevic's death came less than a week after the star witness in his trial, former Croatian Serb leader Milan Babic, was found dead in the same prison. Babic, who was serving a 13-year prison sentence, committed suicide.

His testimony in 2002 described a political and military command structure headed by Milosevic in Belgrade that operated behind the scenes.

Milosevic's death will be a crushing blow to the tribunal and those looking to establish an authoritative historical record of the Balkan wars.

"Justice was late," said Hashim Thaci, the leader of ethnic Albanian insurgents against Milosevic's forces in 1998-1999 in Kosovo's capital, Pristina. "God took him."

Though the witness testimony is on public record, history will be denied the judgment of a panel of legal experts weighing the evidence of his personal guilt and the story of his regime.

"It is a pity he didn't live to the end of the trial to get the sentence he deserved," Croatian President Stipe Mesic said.

The European Union said Milosevic's death does not absolve Serbia of responsibility to hand over other war crimes suspects.

The death "does not alter in any way the need to come to terms with the legacy of the Balkan wars," Austrian Foreign Minister Ursula Plassnik, whose country holds the rotating EU president, said in Salzburg.

Milosevic, a figure of beguiling charm and cunning ruthlessness, was a master tactician who turned his country's defeats into personal victories and held onto power for 13 years despite losing four wars that shattered his nation and impoverished his people.

Milosevic led Serbia, the dominant Yugoslav republic, into four Balkan wars during the 1990s. The secret of his survival was his uncanny ability to exploit what less adroit figures would consider a fatal blow.

He once described himself as the "Ayatollah Khomeini of Serbia," assuring his prime minister, Milan Panic, that "the Serbs will follow me no matter what." For years, they did — through wars that dismembered Yugoslavia and plunged what was left of the country into social, political, moral and economic ruin.

But in the end, his people abandoned him: first in October 2000, when he was unable to convince the majority of Yugoslavs that he had staved off electoral defeat by his successor, Vojislav Kostunica, and again on April 1, 2001, when he surrendered after a 26-hour standoff to face criminal charges stemming from his ruinous rule.

Bosnia also has sued Serbia, accusing it of genocide in the first case of a country standing trial for humanity's worst crime.

Milosevic was born Aug. 20, 1941, in Pozarevac, a drab factory town in central Serbia best known as the home of one of the country's most notorious prisons.

His father was a defrocked Orthodox priest and sometime teacher of Russian. His mother also was a teacher. Both committed suicide.

In high school, he met his future wife, the daughter of a wartime communist partisan hero. Markovic also was the niece of Davorjanka Paunovic, private secretary and mistress of Josip Broz Tito, the communist guerrilla leader who seized power in Yugoslavia at the end of World War II.

Milosevic became president of Serbia in 1989 elections widely considered rigged. His rise alarmed the other peoples of former Yugoslavia — Slovenes, Croats, Macedonians, Albanians and others — who feared that the hard-line nationalist would allow Serbs to dominate the country.

In 1991, Croatia and Slovenia declared their independence from Yugoslavia. Milosevic sent tanks to Slovenian borders, triggering a brief war that ended in Slovenia's secession.

Serbs in Croatia, encouraged by Milosevic, took up arms. Milosevic sent the Serb-led Yugoslav army to intervene, triggering a conflict that left at least 10,000 people dead and hundreds of Croatian villages and towns devastated before a U.N.-patrolled cease-fire was arranged in January 1992.

Three months later, Bosnia-Herzegovina declared its independence, too. Milosevic bankrolled the Bosnian Serb rebellion, triggering an even bigger war that killed an estimated 200,000 people before a U.S.-brokered peace agreement was reached at Dayton, Ohio, in 1995.

During those conflicts, Yugoslavia was ostracized worldwide, and the United States called Milosevic "the butcher of the Balkans." Strict international sanctions and government mismanagement devastated the economy and left its people impoverished.

At Dayton, Milosevic accepted a deal abandoning Croatia's rebel Serbs, who were driven from their homes when the Croatian army recaptured almost all the land the Serbs had seized there in 1991.

The Dayton agreement also meant giving up the nationalist goal of a Serb state in Bosnia. Nevertheless, it bought Milosevic time and transformed his image from Balkan villain to benign peacemaker.

Milosevic's term as Serbian president ended in 1997 and the constitution prevented him from running again. However, he exploited loopholes to have parliament name him president of Yugoslavia, which then included only the republics of Serbia and Montenegro.

It was the thorny problem of Kosovo, the majority Albanian province that served as his springboard to power, which finally set the stage for his downfall. In February 1998, Milosevic sent troops to crush an ethnic Albanian uprising there.

The United States and its allies responded with sanctions. In 1999, after Milosevic refused to sign a Western-dictated peace agreement at Rambouillet, France, NATO conducted 78 days of punishing airstrikes against Yugoslavia.

Milosevic refused to back down and instead ordered his troops to crack down on Kosovo Albanians even harder. More than 800,000 Albanians fled into neighboring Albania, Montenegro and Macedonia before Milosevic finally accepted a peace plan and handed over the province to the United Nations and NATO in June 1999.

Before the conflict ended, the U.N. tribunal indicted Milosevic and four of his top aides for war crimes and crimes against humanity allegedly committed in Kosovo. Later, they broadened the charges against him to include genocide.