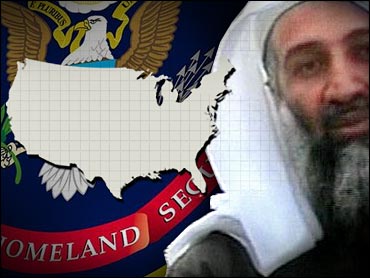 A terrorism investigation in the quiet farming town of Lodi, Calif., has led to the arrests of a father and son who said he trained at an al Qaeda camp in Pakistan and planned to attack U.S. hospitals and supermarkets, authorities said.

Federal investigators believe a number of people committed to al Qaeda have been operating in and around Lodi, a wine-growing region about 30 miles south of Sacramento, FBI Agent Keith Slotter said Wednesday. He would not elaborate.

Slotter added that investigators did not have information about any specific plans for an attack, and the father and son were charged only with lying to federal agents about the son's training at the al Qaeda camp. Two local Muslim leaders also have been detained on immigration violations.

The arrests in California are just the latest in a series of arrests of suspected terrorists who are U.S. citizens. They raise the possibility that there are terrorist sleeper cells in this country who are planning new attacks, reports CBS News Correspondent Bob Orr.

Former FBI analyst Matthew Levitt tells CBS News some kind of attack on the homeland is inevitable. Intelligence analysts question whether al Qaeda still has the capability to pull off a major assault like 9/11.

"There's no question that there are al Qaeda operatives in this country," says Levitt

But, the arrests of the California men suggest al Qaeda may attack whatever it can, including so called "soft targets" like supermarkets, hospitals, shopping malls, and schools. Targets that are numerous and impossible to protect.

"The camp at which this individual trained apparently is tied to core al Qaeda, and that suggests that they are willing to change their modus operandi to conduct less spectacular attacks in the United States," Levitt tells Orr.

Al Qaeda's method of operation has changed since Sept. 11 and the attacks in Kenya and Tanzania, says CBS News Consultant Randall Larsen, who heads the Institute for Homeland Security, and more like the operations in Bali and Madrid more recently.

Before, the operatives were controlled centrally. Now, "they're trained locally and get some funding, but then they return to their own country and decide what attacks they carry out on their own timetable," said Larsen.

In the California case, the son, Hamid Hayat, was interviewed by the FBI last Friday and at first denied any link to terror camps. But the next day he was given a polygraph test and admitted he attended the camp in 2003 and 2004, according to an affidavit by FBI Agent Pedro Aguilar.

"They've been tracking this guy for a while. It resulted in this arrest. And pretty likely, I would say, a conviction, because he's admitted to all this," Larsen said.

Hayat said photos of President Bush and other American political figures were pasted onto targets during weapons training, the affidavit said. At the end of training, participants were given the opportunity to choose the nation where their attacks would be carried out.

"Hamid advised that he specifically requested to come to the United States to carry out his jihadi mission," according to an affidavit released through the Justice Department in Washington. "Potential targets for attack included hospitals and large food stores."

The father, Umer Hayat, lied about his son's involvement and money he sent for the son's training, the affidavit said.

"It sounds like a pretty sophisticated training program," said Larsen. "The question is, these few cases we're seeing now, these three or four cases going on, are they the tip of the iceberg or is this a bit of an aberration? The concern right now in the intelligence community is that there may be a lot of these."

In Washington, President Bush said he had been briefed on the matter.

"I was very impressed by the use of intelligence and the follow-up," Mr. Bush said. "And that's what the American people need to know, that when we find any hint about any possible wrongdoing or a possible cell, that we'll follow up — by the way, honoring the civil liberties of those to whom we follow up."