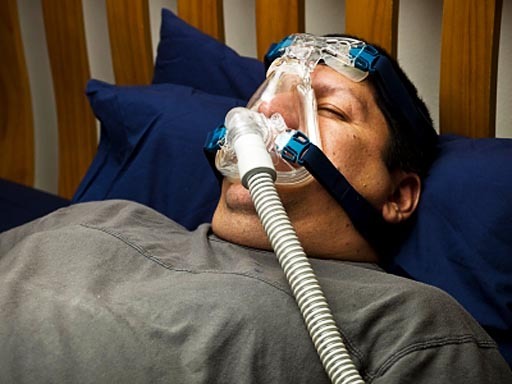 (CBS) People who use face masks for sleep apnea may have one more reason to breathe easier at night. The masks, known as continuous positive airway pressure (CPAP) therapy, were found to reduce the risk for heart disease and other health problems, a new study shows.

Sleep apnea is a common disorder in which a person has pauses in breathing or shallow breaths while sleeping. The most common type of sleep apnea is obstructive sleep apnea, which results from airways that are collapsed or blocked during sleep. Previous studies have linked sleep apnea to an increased risk for diabetes, heart disease, stroke, and obesity.

The study - published in the Dec. 15 issue of the New England Journal of Medicine - investigated the connection between obstructive sleep apnea and metabolic syndrome, which is the name for a group of risk factors - including belly fat and insulin resistance - that raise the risk for heart disease, diabetes and stroke.

For the study, researchers tested 86 patients with sleep apnea for three months with either CPAP treatment or a "placebo" mask that had tiny holes in it to reduce air flow.

After three months of CPAP therapy, patients with moderate-to-severe obstructive sleep apnea had lower blood pressure, lower cholesterol, and a number of other heart risk factors were reversed.

With treatment that appears to reverse these effects, why does not everyone with sleep apnea use CPAP masks?

For one, sleep apnea often goes undiagnosed. Sleep apnea effects up to 18 million Americans, but most don't realize they have it because it only occurs during sleep, and doctors generally can't detect the condition during routine office visits. Those that do know they have the condition often don't want to bother with masks, which they may find cumbersome.

"It's not the most attractive for couples," Dr. Lisa Liberatore, otolaryngoloist at Lenox Hill Hospital in New York told ABC News. "Sometimes, they feel like they're choking."

But the new study only "adds to the growing body of knowledge that obstructive sleep apnea has long-term consequences for your health, and that treatment reverses some of those consequences," Dr. David Rapoport, an associate professor of medicine and director of the Sleep Disorders Program at NYU Langone Medical Center, told HealthDay.

The American Sleep Apnea Association has more on sleep apnea.

The 7 foods most likely to make your pet sick
Thanks for reading CBS NEWS.
Create your free account or log in
for more features.
View CBS News In
CBS News App Open
Chrome Safari Continue
Be the first to know
Get browser notifications for breaking news, live events, and exclusive reporting.