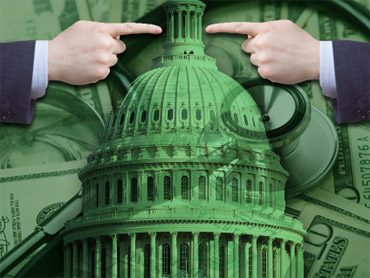 The Republican Party already has plenty of evocative phrases with which to hammer the health care reform effort: "Government takeover," "ram down our throats," "job-killing monstrosity."

Now House Republican Leader John Boehner's office has come up with perhaps the most striking entry yet: "Slaughter Solution."

In a blog post on Boehner's site, Dave Schnittger writes the following: "The twisted scheme by which Democratic leaders plan to bend the rules to ram President Obama's massive health care legislation through Congress now has a name: the Slaughter Solution."

The "Slaughter" here is House Rules Chairman Rep. Louise Slaughter (D-NY), who CongressDaily reported Wednesday is "prepping to help usher the healthcare overhaul through the House and potentially avoid a direct vote on the Senate overhaul bill." She is reportedly considering putting forth a rule that would dictate that the Senate version of the bill is automatically passed through the chamber once the House passes a corrections bill making changes to it.

That's all a little complicated, of course: "Slaughter Solution," by contrast, is not. It also manages to correlate passage of the health care bill with, as Merriam-Webster defines the word slaughter, "killing of great numbers of human being."

Who needs "death panels" when you've got that?