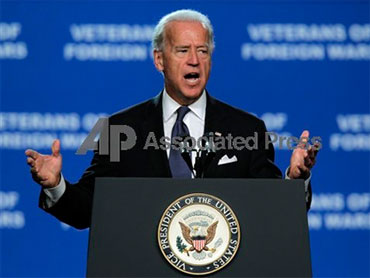 In Nov., 2004 a brutal murder shocked Holland and the world. On a busy Amsterdam street, in broad daylight, a prominent film maker named Theo van Gogh was shot, stabbed and mutilated in front of dozens of witnesses.

A young Muslim radical was arrested. What was described as a ritual slaughter set off alarm bells throughout Europe and the United States, where millions of devoute Muslims live as minorities in secular society.

For the Dutch who have prided themselves for centuries on a tradition of tolerance, it was a painful awakening, the prospect of a homegrown jihad in the world's most liberal state. As Morley Safer reported 18 months ago, it all began with a movie called "Submission," a 12 minute movie, which aired on Dutch television.

The images were meant to shock.

In one image, the opening lines of the holy book, the Koran, were written across the naked body of a Muslim woman. Another image showed Koranic verses about female obedience scrawled on the back of a woman beaten by her husband, while a female voice accused Allah of condoning the violence.

The movie, "Submission," was directed by Holland's most controversial film maker, Theo Van Gogh, a descendant of the painter Vincent Van Gogh, and a national gadfly, who made a career insulting everyone, no matter their faith, race or gender.

"Submission" was right up Van Gogh's alley, but it wasn't his idea. The movie was written and conceived by a 35-year-old Muslim woman, Ayaan Hirsi Ali, a member of the Dutch parliament, and a relentless critic of the way Islam treats women.

"Surely that must have been a gross insult to devout Muslims, to see those pictures," says Safer, of the images that appear in "Submission."

"It depends," says Hirsi Ali. "If you're a Muslim woman and you read the Koran, and you read in there that you should be raped if you say 'no' to your husband, that is offensive. And that is insulting."

Such provocative interpretations of the Koran have made Hirsi Ali a lot of enemies among radical Muslims. She lives in hiding with round-the-clock security. But she gave 60 Minutes an exclusive interview in a room in the Dutch parliament.

In the past, Hirsi Ali has called the prophet Mohammed a "perverted tyrant." She remarks, "he has said a few things that are not compatible with democracy." She has also called a part of the Koran "a license for oppression."

Even before the movie was broadcast, Hirsi Ali worked in parliament under guard. After the broadcast, she received a new wave of death threats, and the government increased her security. There were threats against Van Gogh, too, but he laughed them off. This was Holland, after all, the world's capital of free speech.

But Van Gogh was murdered as he cycled to work on a bike path in Linnaeus Street in Amsterdam one morning. He was shot several times by a bearded young man. As he lay dying, Van Gogh was reported to have begged for mercy, and said, "Can't we talk about this?" But the man shot him again, slit his throat and stabbed him, pinning a letter to his body.

Holland was in a state of shock. Tens of thousands massed in the center of Amsterdam to mourn Van Gogh's death, a sense of lost innocence and enormous anger. There were fire-bombings of mosques and Muslim schools, and counterattacks against churches.

Mohammed Bouyeri, 26, was charged with murder. Eleven other Muslim men were arrested and charged with conspiracy to assassinate Hirsi Ali. That letter pinned to Van Gogh's body was addressed to her. It said that she would be destroyed, along with Holland and the United States.

Did Hirsi Ali think that Van Gogh would become a target?

The Dutch government got Hirsi Ali out of the country while the people of Holland grappled with the aftermath of the murder. Almost overnight, the tolerant nation was transformed, and long-simmering resentment against the country's Muslim minority erupted.

"The death of Theo was actually a kind of a smart bomb. Everybody is threatened when they speak out," says Theodor Holman, a columnist and radio commentator. He was also one of Van Gogh's closest friends.

Van Gogh's death, Holman says, really shocked the country, "Because the country did love him as well. He had his own television show. He had a radio show. He made movies. So he embodied what you can do in this country and what you can say."

And that means just about anything goes. Coffee shops sell cappuccino, hashish and marijuana, and it's legal. In storefronts, prostitutes offer anything you fancy, which is also perfectly legal. Gay life and gay marriage are also protected by law.

This was all a reflection of a centuries-old tradition of religious and social tolerance that included, until very recently, a policy of openness to the world. For decades, Dutch immigration laws were the most easygoing on earth. Those laws have become more restrictive in recent years, but in the wake of Van Gogh's death, there is a call for extreme measures, which were once unthinkable in Holland.

"A poor man's Patriot Act is in the making," says Holman. "A Dutch way of having a Patriot Act."

Holland once had a reputation, historically, of being a welcoming country. Has that changed? "I think that is gone now," says Holman. "I hope it will return. But it has gone now."

It's changed particularly for new Muslim immigrants. Out of a Dutch population of 16 million, there are 1 million Muslims, mostly Moroccans and Turks, who are now Dutch citizens. With high unemployment, and with huge numbers who never learned the language, most Muslims live in a separate world, in barren suburbs known as "dish cities," named for the satellite dishes beaming sometimes inflammatory Arab television into homes, and fostering a militant Islam. The man charged with killing Van Gogh grew up in such a place.

Paul Scheffer, a professor of sociology at the University of Amsterdam, says people of faith of every kind are welcome, so long as they understand that in Dutch democracy, virtually nothing is sacred.

"But it's not so easy, because what you're asking these families to do, when you even suggest that, is give up your tradition," says Safer. "And become one of us."

On that point, Nabil Marmouch, a Muslim community leader, agrees with Scheffer. He says Muslims in Holland have been marginalized and worse. And the movie, "Submission," is a prime example.

"You cannot emancipate women by insulting them," says Marmouch. "Unless, of course, that is your hidden agenda, to insult them, and to create what has happened here in the Netherlands."

Marmouch, who is starting a Muslim political party, says murder is wrong, but he says he was not surprised by the murder of Van Gogh: "We could expect that from the beginning."

In part, Marmouch's lack of surprise stems from the fact that Van Gogh insulted people from all religious backgrounds. "So that is a good argument," asks Marmouch. "'Oh, we Christians are being insulted, so you Muslims should also be insulted?' No, I don't think so."

Marmouch adds, "The whole thing is being politicized by Ayaan Hirsi Ali."

She is seen as a traitor to Islam, the faith she rejected as a very young woman. Hirsi Ali says her rejection of Islam started at an early age: "From the time I started reading novels of Nancy Drew and Hardy Boys, I wanted to be like Nancy Drew." Her beliefs estranged her from her upper middle class Somali parents, who remain devout believers.

"They just don't get it, I think," says Hirsi Ali, who says her father thinks she's misguided. "The last time I spoke to my father, he told me that he believes that one day I will return to the faith."

She's come a long way since she first arrived in Holland as a 22-year-old woman fleeing a marriage her father had arranged, and seeking asylum. Nowadays, she's a kind of star, and the Dutch take pride in how she rose from menial jobs in factories and hotels to attend university, and finally, to get elected to parliament.

How did she do it? "The American dream," says Hirsi Ali. "I think it's in every individual, if you have the will to improve your life."

She shook up Dutch politics by pointing to the blind spots in this tolerant democracy, like the murder of Muslim women who stray from the faith -- so-called "honor killings."

"I suppose some people would say we can't impose our alien laws on these new citizens," says Safer.

"That was the definition of tolerance before I came," says Hirsi Ali. "And now we are redefining that by saying, freeing these women, giving them a chance at life is not imposing Dutch will, or let's say Dutch values, on others. But it's protecting these individuals."

After the murder of Van Gogh, Hirsi Ali stayed in hiding for about three months. In January, she returned to parliament, to a democracy less sure of itself, and a new anxiety in Holland: a feeling that it's no longer safe to speak out or make art or movies about certain subjects.

Organizers of the Rotterdam Film Festival, for instance, cancelled a showing of "Submission," saying they feared violence.

But Hirsi Ali refuses to back down. She says she's going to make a sequel to "Submission."

"By not making 'Submission Part II,' I would only be helping terrorists believe that if they use violence, they're rewarded with what they want," says Hirsi Ali.

Will she submit to the threats? "Not me," she says.

Perhaps not. But last spring the whole issue of security just became too much for her and the Dutch government. She resigned her seat in parliament and this fall will join a think tank in Washington D.C.