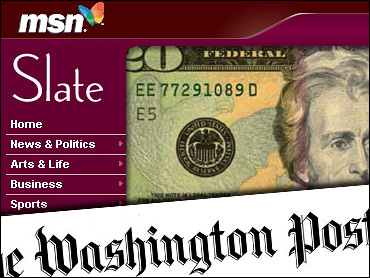 Terms of the deal were not disclosed. Microsoft has said Slate, with roughly 6 million readers monthly, breaks even financially but has sought a buyer since the summer. Under the sales agreement, content from Slate will continue to be available on Microsoft's MSN Web site.

The Post, which has increasingly sought unique content for its Web site distinct from its newspaper articles, said it planned no editorial changes at Slate. Jacob Weisberg will remain editor, and Slate will continue to operate offices in New York and Washington.

"Microsoft has been a wonderful home for us since 1996," Weisberg said in a statement. "It's clear, though, that The Washington Post Company is the best place for Slate to grow and develop."

The Post said it will operate Slate as part of the same business subsidiary, Washington Post Newsweek Interactive, that runs its popular Washingtonpost.com and Newsweek.com Web sites.