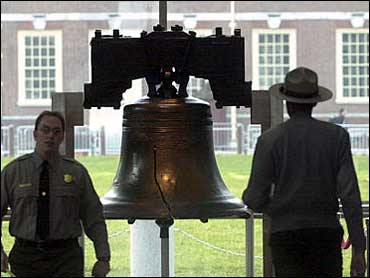 A self-described wanderer who pulled a hammer from a backpack and pounded on the historic Liberty Bell last year was sentenced Tuesday to nine months behind bars.

Mitchell A. Guilliatt, 28, was also given five years' probation and ordered to repay the $7,093 cost of repairing the gouge marks he made in the symbol of liberty.

Guilliatt, an unemployed man with shaggy hair and a bushy beard, pulled a small sledgehammer out and struck the cracked bell several times in front of tourists last April, shouting, "God lives!"

"It was not my intention to damage the bell. It was strictly to ring the bell," Guilliatt told U.S. District Judge Jan E. DuBois.

Guilliatt will serve his time in Boise, Idaho, near the home of his mother, where he had been confined and electronically monitored since the incident. He pleaded guilty Jan. 18 to damaging an archaeological resource.

The 2,080-pound bell sits on a pavilion outside Independence Hall. It was rung most famously to announce the first public reading of the country's Declaration of Independence from Britain on July 8, 1776.

It has been rung rarely since a crack that formed shortly after its creation expanded to make it too fragile for regular use by the 1840s. Park officials have said Guilliatt's hammer dented and chipped the bell's surface.