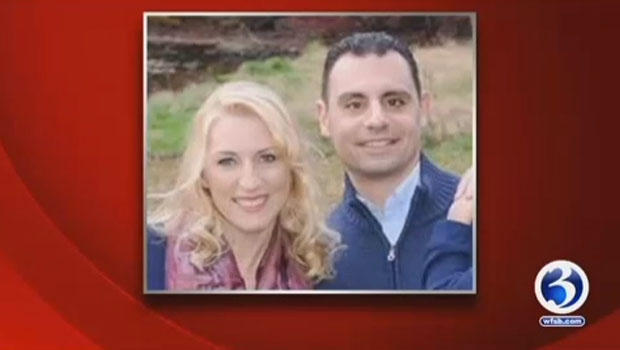 ELLINGTON, Conn. -- A 40-year-old Connecticut man is facing charges that he killed his wife in 2015, and police are reportedly citing data from the slain woman’s Fitbit in the case against him.

Richard Dabate was arrested this month and charged with murder, tampering with evidence and making a false statement in the fatal shooting of 39-year-old Connie Dabate on Dec. 23, 2015.

Authorities say Dabate told them a masked man had entered their Ellington home, shot his wife and tied him up before he burned the intruder with a torch. Investigators say he was found with an arm and leg zip-tied to a folding chair, and he had superficial knife wounds, according to the Hartford Courant.

Police say there were no signs of a struggle in the home, nothing was stolen and a police dog only picked up Richard Dabate’s scent, reports the Courant, citing an arrest warrant. The warrant also says Connie Dabate’s Fitbit was logging steps after the time Richard Dabate told them she was killed.

The warrant says Dabate had a pregnant girlfriend at the time of his wife’s killing and that he told his girlfriend he was getting a divorce.

Dabate allegedly told investigators his wife was unable to have another child, so the couple did some “untraditional things.” He said all three planned to co-parent the child, reports CBS affiliate WFSB. The couple had two children.

Police also say Dabate changed his story, put in a claim for his wife’s $475,000 life insurance policy and withdrew nearly $93,000 from an investment account in his wife’s name.

Dabate was released on bail last week. A judge ordered him to turn in his passport.

Dabate is due in court April 28. His lawyer told the Hartford Courant that his client maintains his innocence and had offered to turn himself in after an arrest warrant was issued.