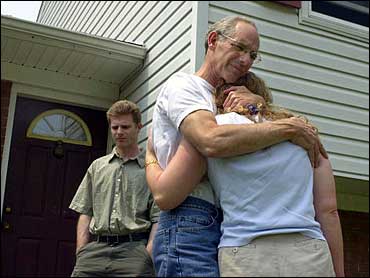 A video posted today on an Islamic militant Web site showed the beheading of an American citizen believed to be Nick Berg, a 26-year-old West Chester man who was in Iraq looking for work.

Berg, who was unmarried, owned a small business that worked with communication equipment like radio towers, and had traveled to Third World countries to help spread technology, his family said.

He saw his trip to Iraq, his father Michael Berg said, as an adventure, but one that fit into his ideology. He was a war supporter and backed the Bush administration.

Berg's father said his son was Jewish and had a fringed religious cloth with him, but he did not think Berg wore the clothing in public. Still, "there's a better chance than not that they knew he was Jewish," Michael Berg said. "If there was any doubt that they were going to kill him that probably clinched it, I'm guessing."

"He had this idea that he could help rebuild the infrastructure," she said.

But Berg was arrested by Iraqi police in March, and held for 13 days, though he was never told why. The experience convinced him to leave Iraq and return to West Chester, his parents said last week.

Then, on April 9, he disappeared.

Yesterday, Berg was remembered by friends and former teachers as creative, curious and deeply concerned for the world's "have-nots."

"He was approximately the coolest guy ever — he could build a computer out of cardboard and tin foil — and that's not really an exaggeration," said Will Scott, a 27 year old software developer in Austin, Texas, who went to high school with Berg.

Scott recalled a summer science program he attended with Berg.

"Nick had an entire department of his own that he basically invented called Bergology — it was this weird combination of computer engineering, electronics, craftsmanship — the kids loved it," Scott said. "He was really good at it — he had an energetic personality and a really good attitude — he would really get along with anybody."

The manner of Berg's murder was particularly horrifying, Morrison said.

"I expected to be interviewed some day about how successful he was, that he had saved a Third World country," said Morrison, who choked back tears as he spoke.

He said Berg visited the school around Thanksgiving 2003, and told about having recently made a trip to Africa.

"He said he showed a village how to better make bricks. That's the kind of kid he was."

Shop teacher Harry "Skip" Best said Berg was "really interested in bridging the gap between the haves and the have-nots."

Morrison said he doubted that business was Berg's principal concern in going to Iraq. "A kid like that just wanted to help," he said.

Charlotte Knighton, who taught Berg's 8th grade science class, remembered as an "individualist," who would carve his own path in life.

Speaking from her home in Bozeman, Montana, Knighton said that Berg was a complex young man — funny, dramatic, compassionate, and a humanitarian.

"He had gone to Africa when he was in college and he was so taken by the starving people over there that when he came home it was difficult for him to even eat," she said.

Berg's parents said he had "all but finished" his engineering studies at Cornel before dropping out. He just didn't want to be a student anymore, said his father, Michael.

He went to work for a businessman in Texas who built radio towers. His customers, the father said, included little radio stations from Virginia to New York. He later ended up working for big network radio stations, including those owned by Sunshine, Clear Channel and Citadel.

Berg liked to climb high, a risky endeavor. In 2000, before the Republican National Convention in Philadelphia, he worked for a rigging company stringing wires on the roof of the convention building.

Berg's family said Tuesday they knew earlier this week that their son had been decapitated, but didn't know the details of the killing. When told of the video by a reporter, Berg's father, Michael, and his two siblings hugged and cried.

"I knew he was decapitated before. That manner is preferable to a long and torturous death. But I didn't want it to become public," Michael Berg said.

The State Department on Tuesday told the Bergs their son's body was in Kuwait and could arrive in the United States as early as Wednesday.

"Our thoughts and prayers are with his family," said White House Press Secretary Scott McClellan, traveling with President Bush in Arkansas. "It shows the true nature of the enemies of freedom. They have no regard for the lives of innocent men, women and children. We will pursue those who are responsible and bring them to justice."

Because Berg was a U.S. citizen, the FBI has jurisdiction to investigate the case as a criminal matter. A senior law enforcement official in Washington, speaking on condition of anonymity, said the FBI would probably get involved so long as adequate security is provided by the military for investigators to do their work.

The slaying recalled the kidnapping and videotaped beheading of Wall Street Journal reporter Daniel Pearl in 2002 in Pakistan. Four Islamic militants have been convicted of kidnapping Pearl, but seven other suspects — including those who allegedly slit his throat — remain at large.

The Bergs last heard from their son April 9, when he said he would come home by way of Jordan, Turkey or Kuwait. But by then, hostilities in Iraq had escalated.

Suzanne Berg on Tuesday said she was told her son's body would be transported to Kuwait and then to Dover, Del. She said the family had been trying for weeks to learn where their son was but that federal officials had not been helpful.

"I went through this with them for weeks," she said. "I basically ended up doing most of the investigating myself."