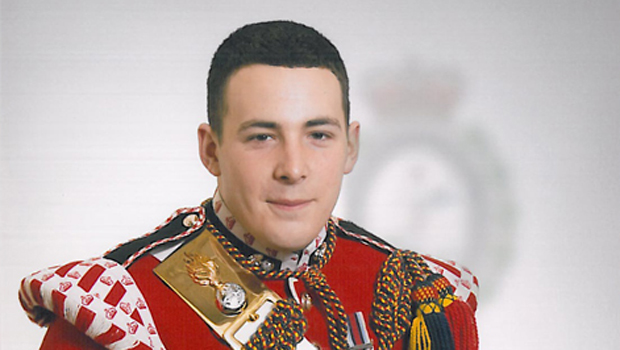 This story contains a video some viewers might find graphic.

The soldier who was brutally killed in a knife attack in Southeast London Wednesday was remembered by British military officials as a popular, well-liked drummer and loving father of a 2-year-old boy.

Drummer Lee Rigby, affectionately known within his platoon as "Riggers," was 25 years old. Government officials say he joined the Army in 2006 and served in Afghanistan, Germany and Cyprus over the past few years.

Rigby started his career as a machine gunner in Cyprus before returning to West London in 2008, where he continued his service guarding the Royal Palaces as part of his Battalion's public duties commitment. In 2009 he was deployed to the Helmand province in Afghanistan, where he served as a Fire Support Group officer. After another stint in London he was later moved to Celle, Germany, as part of the Small Scale Contingency Battle Group.

In 2011, Rigby returned to London for a recruiting post, where he assisted with duties at Regimental Headquarters in the Tower of London. It was around this time his son, Jack, was born.

A native of Crumpsall, Manchester, Rigby was also passionate and life-long Manchester United fan. Warrant Officer Class 1 Ned Miller said he would always stop by to talk about how the soccer team would win the league again.

"Riggers is what every battalion needs," Miller said in a statement. "He was one of the Battalion's great characters, always smiling and always ready to brighten the mood with his fellow Fusiliers. He was an excellent drummer and well respected within the Drums platoon. He was easily identified whilst on parade by the huge smile on his face and how proud he was to be a member of the Drums."

"He was always around when needed and will be sorely missed by all members of the Second Fusiliers Corps of Drums," he said. "Once a Fusilier, always a Fusilier."

Rigby was attacked by two men in broad daylight nearby a London military barracks in Woolwich. He was wearing a "Help for Heroes" shirt in support of U.K. troops when he died. One of the alleged assailants was videotaped after the attack. "We swear by almighty Allah we will never stop fighting you," the man declared. "We must fight them as they fight us." The camera then panned away to show a body lying on the ground.

The man stayed at the scene with another suspect before both were shot by responding police. They were hospitalized with non-life-threatening injuries and placed under arrest. On Thursday, authorities announced the arrests of two others - a man and a woman, both 29 - on suspicion of conspiracy to murder.