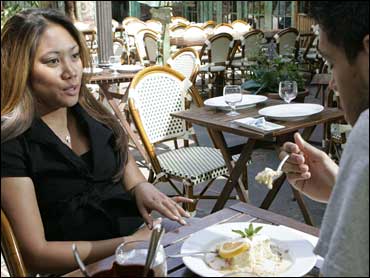 The bodies of four international journalists were brought out of Afghanistan on Wednesday, two days after the group was ambushed by gunmen on the road to Kabul, a Pakistan-based news agency reported.

Anti-Taliban militiamen recovered the bodies Tuesday. They were held overnight in a hospital in nearby Jalalabad, and transported Wednesday on a Red Cross convoy to the Pakistani border.

It's unclear who carried out the attack but there is little security anywhere in the fractured nation, reports CBS News Correspondent Randall Pinkston. Even in areas the Taliban have left, renegades, including Osama bin laden's Arab fighters, still roam this rugged countryside.

The journalists were traveling in a convoy of six to eight cars through a province that recently came mainly under the control of anti-Taliban forces.

The Afghan Islamic Press reported the convoy had crossed over into Pakistan at the Torkham border crossing.

The journalists were attacked Monday as they traveled with a group of about eight cars from the eastern city of Jalalabad to Kabul. An anti-Taliban leader in the area said the attackers were bandits, but witnesses said they shouted pro-Taliban slogans.

Militiamen loyal to the new administration in Jalalabad set out early Tuesday to search for the missing journalists, and they reached the spot of the ambush around 8 a.m., encountering no resistance as they retrieved the bodies. They brought the bodies to a Jalalabad hospital, where colleagues identified them.

Cutuli and Fuentes filed reports Monday about finding what they believed were capsules of deadly sarin nerve gas at an abandoned al-Qaida camp in the Jalalabad region.

Fuentes's story said he discovered a cardboard box with Russian labeling that said SARIN/V-Gas. His report said the box contained 300 vials of a yellowish liquid.

A Pentagon duty officer said the U.S. military had no information on the reports.

The area of the ambush recently came under the control of anti-Taliban forces. However, some Taliban stragglers and Arab fighters loyal to Osama bin Laden are still believed to be in the area, and there had been earlier reports of armed robberies on the road.

The convoy set out Monday morning. Because the road was dusty, the cars in the convoy spread out, and their occupants often lost sight of one another.

Near the town of Serobi, 35 miles east of Kabul, six gunmen on the roadside waved the first three cars in the convoy to stop. One car sped ahead, while two stopped, said Ashiquallah, who was driving the car carrying the Reuters journalists. He uses only one name.

He said the gunmenwearing long robes, beards and turbans, warned them not to go any farther because there was fighting ahead with the Taliban. At that moment, a bus from Kabul came by and said the road was safe. The cars' drivers thought the gunmen were thieves and tried to speed away, but the gunmen stopped them.

The gunmen then ordered all the journalists out of the cars and tried to force them to climb the mountain. When they refused, the gunmen beat them and threw stones at them, Ashiquallah said.

"They said, 'What, you think the Taliban are finished? We are still in power and we will have our revenge,"' Ashiquallah said.

The gunmen then shot the Italian woman and one of the men, he said. The other two men also had been shot.

The drivers fled back toward Jalalabad, he said, leaving behind the Afghan translator, a man named Homuin. Homuin's whereabouts were unknown Tuesday.

Ashiquallah's account was corroborated by another translator and driver who escaped in the other car.

Haji Shershah, an anti-Taliban commander in Jalalabad, said villagers in the area reported numerous other attacks involving gunfire on vehicles on the same road during the day.

A French journalist was robbed in the area the day before, and hours after Monday's assault on the journalists, an Afghan car arrived in Jalalabad with two bullet holes after being attacked.

Shershah said the attackers were bandits, not Taliban or his own fighters.

"They're not Taliban, they are thieves," Shershah said. "They just want to put the blame on the Taliban. ... They were robbing lots of people."