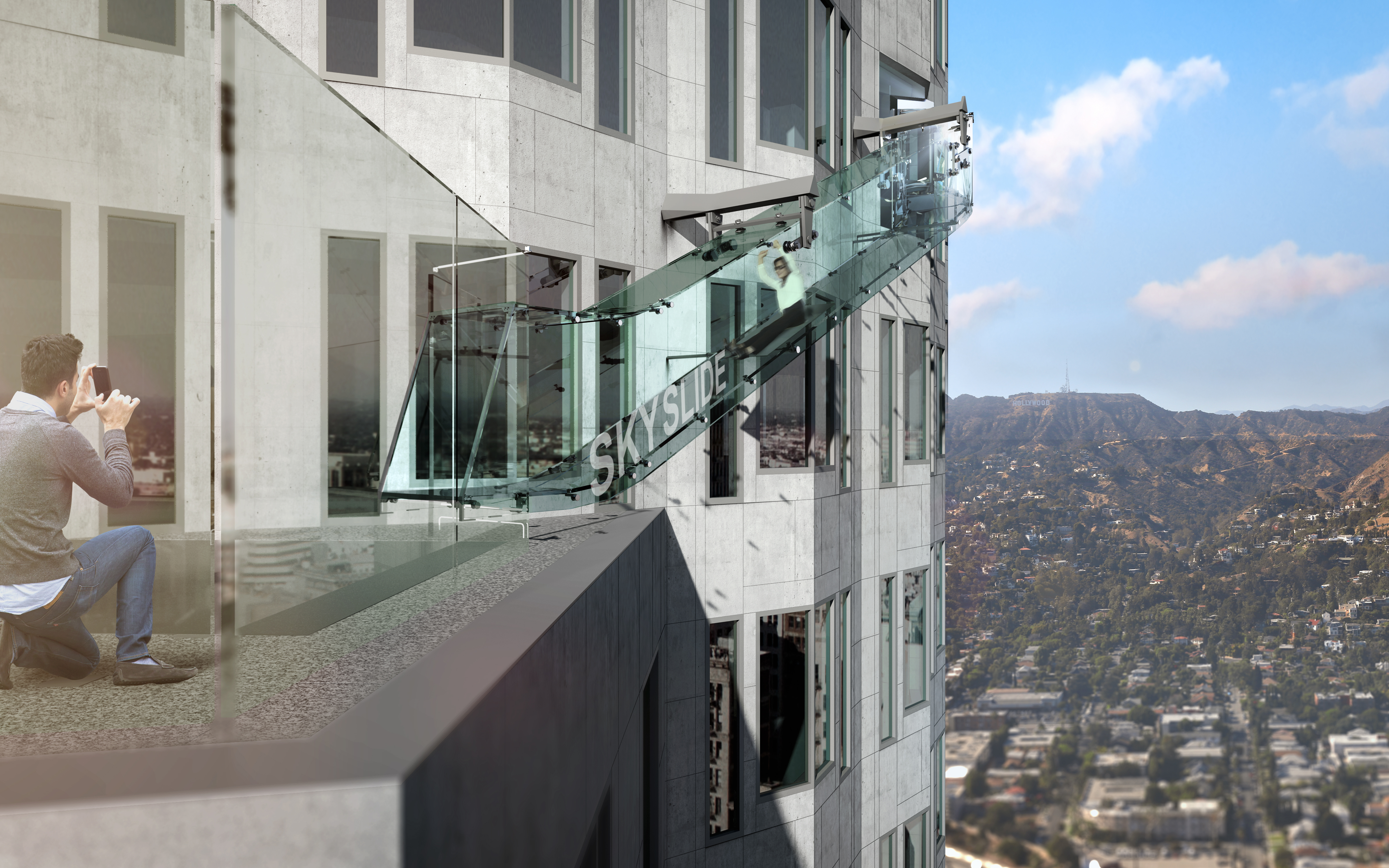 Since 1989, the 1,018-foot tall U.S. Bank Tower has held the title of tallest skyscraper west of Chicago. And now, it's got a new feature attached to its side - a 45-foot-long slide nearly 1,000 feet above downtown Los Angeles.

Attached to the outside of the 70th floor of the skyscraper, the Skyslide drops you down to the 69th floor for 33 bucks. It's just one example of a high-rise construction boom in the West, reports CBS News correspondent Carter Evans.

John Gamboa is senior vice president of OUE America, the Singapore-based real estate firm that bought the tower three years ago for $367 million.

"The slide is something fresh and never been done before," Gamboa said.

"This is an attraction to get people up to the top of this building?" Carter asked.

"Absolutely," Gamboa said. "Not everyone was on the same page when we came up with the idea for the slide... They said, 'excuse me?'"

But the disbelief soon turned into reality. Now, the Skyslide is ready to open to the public this weekend.

The process started back in March when a Sikorsky helicopter - usually used for fighting wildfires - hoisted the five-ton slide onto the building's rooftop.

This week, the chopper's overhead captured images of the final test runs before the big grand opening. The slide is just one part of an estimated $100 million top-to-bottom renovation of the building.

"When we bought it, (it) was tired, it was old, so we've done a lot to make sure the iconic is still iconic," said OUE America President and CEO Lucy Rumantir.

It's not the only skyscraper in L.A. reaching new heights. Just blocks away, the $1.2 billion Wilshire Grand Tower is less than a year away from completion.

Chris Martin's architecture firm designed the Wilshire Grand which, when finished, will soar 1,100 feet in the sky, taking the title of tallest on the West Coast.

"Really what it gets us in the end is the opportunity for the public to come down here and say, 'I want to go to the top!'" Martin said.

San Francisco is also in on the race to the top, building the 1,070-foot-tall Salesforce Tower to cap its new mass transit hub.

Further north, developers in Seattle have submitted plans for a structure called Four-C, estimated at 100 stories or 1,029 feet.

"I think the economy's very good for construction right now and you're seeing a lot of foreign investment coming into areas like Los Angeles and Seattle and northern California," said Brendan Murphy, vice president of Turner Construction. "And it's just creating a lot of great opportunities to build really iconic buildings like Wilshire Grand."

Back at the Skyslide, they admit they will soon lose the tallest-in-the-West designation, but they're letting that slide.

"You can only achieve something different if you dare to do something big," Rumantir said.

And it's not hard to see they've definitely done something different with their ride over the rooftops of downtown Los Angeles. And for the squeamish out there, they say the slide can withstand an 8.0 earthquake and 110-mile-per-hour hurricane force winds.