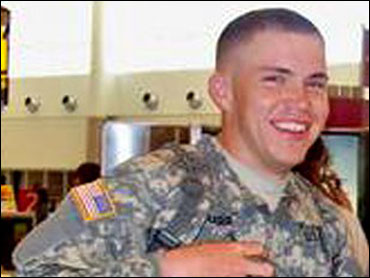 Strapped to his dying instructor a few thousand feet from the ground on his first skydive, Daniel Pharr found himself floating toward a house and some trees.

The military taught the 25-year-old soldier not to panic. And TV taught him to pull the toggles on the already-deployed parachute to steer.

So Pharr grabbed the right handle and pulled to avoid the house and tugged again to miss the trees, landing safely in a field about a third of a mile from their intended landing spot.

Pharr said he wrestled out of the harness binding him to his instructor, George "Chip" Steele, and started CPR trying to save him from an apparent heart attack.

Steele was later pronounced dead, but the tragedy could have been worse: Other instructors at the skydiving school told Pharr if he had pulled the toggle too hard, the chute would have spun out of control, and he could be dead, too.

"They told me afterward that it was amazing that I knew to do that. This is my survival instinct at that point. I just kind of did what I had to do," said Pharr, taking a break Monday from his job at Fort Gordon near Augusta, Georgia.

The jump was a Christmas gift from Pharr's girlfriend. The two went to Skydive Carolina in Chester on Saturday to jump from 13,500 feet in the air while attached to instructors.

Steele, 49, gave instructions as the plane climbed. He told Pharr he loved skydiving, having jumped more than 8,000 times.

They were the last of about 10 skydivers to jump out of the plane. Pharr enjoyed a minute of free fall as the cold air rushed by.

"He pulled the chute," Pharr said. "It got super quiet. It's eerily quiet up there. I made the comment to him, 'It's surprising how quiet it is.' And he's like: 'Welcome to my world."'

A few seconds passed, and Pharr asked his instructor another question. This time, Steele didn't answer. Pharr repeated his question. No answer.

"And then I just looked up at him and he looked like he was conscious, but just talking to him, I realized something was wrong," Pharr said. "So at that point I realized I was just going to have to do what I had to do to get down to the ground and try to help him."

The pair ended up about a third of a mile from the airstrip where they were supposed to land, blocked from the spectators by trees. Pharr's CPR failed to revive Steele.

After paramedics arrived and stepped in to diagnose Steele, Pharr asked them to call his girlfriend and mother, who was watching from the air strip.

Pharr's mother said all they knew at the time was from a brief message on another staffer's radio: A tandem pair was down and it didn't look good.

"It was an eternity," Darlene Huggins said, when asked how long it took her to hear her son's message he was safe. "No, really, it could have been 10, 15 minutes."

Initial indications are Steele died of a heart attack. Chester County Coroner Terry Tinker said he would wait for a written report from Monday's autopsy before releasing an official cause of death.

Skydive Carolina General Manager James La Barrie released a statement saying it appeared Steele, a test jumper and instructor, died from a medical problem. No one answered the phone Monday at a listing for Steele in Sumter.

Pharr wants to jump again, but it looks like his first skydive will be his last.

"My family has told me I have to keep my feet on the ground," he said.