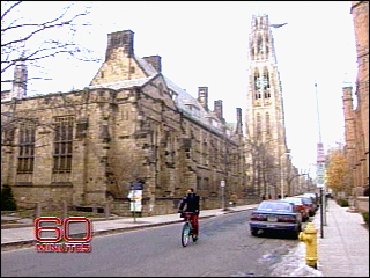 As opposite as George Bush and John Kerry may seem to be, they do share a common secret - one they've shared for decades, and one they will not share with the electorate.

The secret: details of their membership in Skull and Bones, the elite Yale University society whose members include some of the most powerful men of the 20th century.

Bonesmen, as they're called, are forbidden to reveal what goes on in their inner sanctum, the windowless building on the Yale campus that is called the Tomb.

When 60 Minutes first reported on Skull & Bones last October, conspiracy theorists, who see Skull and Bones behind just about everything that goes wrong, and even right, in the world, were relishing the unthinkable - the possibility of two Bonesman fighting it out for the presidency.

Over the years, Bones has included presidents, cabinet officers, spies, Supreme Court justices, captains of industry, and often their sons and lately their daughters, a social and political network like no other.

And to a man and women, they'd responded to questions with utter silence until an enterprising Yale graduate, Alexandra Robbins, managed to penetrate the wall of silence in her book, "Secrets of the Tomb," reports CBS News Correspondent Morley Safer.

"I spoke with about 100 members of Skull and Bones and they were members who were tired of the secrecy, and that's why they were willing to talk to me," says Robbins. "But probably twice that number hung up on me, harassed me, or threatened me."

Secret or not, Skull and Bones is as essential to Yale as the Whiffenpoofs, the tables down at a pub called Mory's, and the Yale mascot - that ever-slobbering bulldog.

Skull and Bones, with all its ritual and macabre relics, was founded in 1832 as a new world version of secret student societies that were common in Germany at the time. Since then, it has chosen or "tapped" only 15 senior students a year who become patriarchs when they graduate -- lifetime members of the ultimate old boys' club.

"Skull and Bones is so tiny. That's what makes this staggering," says Robbins. "There are only 15 people a year, which means there are about 800 living members at any one time."

But a lot of Bonesmen have gone on to positions of great power, which Robbins says is the main purpose of this secret society: to get as many members as possible into positions of power.

"They do have many individuals in influential positions," says Robbins. "And that's why this is something that we need to know about."

President Bush has tapped five fellow Bonesmen to join his administration. Most recently, he selected William Donaldson, Skull and Bones 1953, the head of the Securities and Exchange Commission. Like the President, he's taken the Bones oath of silence.

Ron Rosenbaum, author and columnist for the New York Observer, has become obsessed with cracking that code of secrecy.

"I think there is a deep and legitimate distrust in America for power and privilege that are cloaked in secrecy. It's not supposed to be the way we do things," says Rosenbaum. "We're supposed to do things out in the open in America. And so that any society or institution that hints that there is something hidden is, I think, a legitimate subject for investigation."

His investigation is a 30-year obsession dating back to his days as a Yale classmate of George W. Bush. Rosenbaum, a self-described undergraduate nerd, was certainly not a contender for Bones. But he was fascinated by its weirdness.

"It's this sepulchral, tomblike, windowless, granite, sandstone bulk that you can't miss. And I lived next to it," says Rosenbaum. "I had passed it all the time. And during the initiation rites, you could hear strange cries and whispers coming from the Skull and Bones tomb."

Despite a lifetime of attempts to get inside, the best Rosenbaum could do was hide out on the ledge of a nearby building a few years ago to videotape a nocturnal initiation ceremony in the Tomb's courtyard.

"A woman holds a knife and pretends to slash the throat of another person lying down before them, and there's screaming and yelling at the neophytes," he says.

Robbins says the cast of the initiation ritual is right out of Harry Potter meets Dracula: "There is a devil, a Don Quixote and a Pope who has one foot sheathed in a white monogrammed slipper resting on a stone skull. The initiates are led into the room one at a time. And once an initiate is inside, the Bonesmen shriek at him. Finally, the Bonesman is shoved to his knees in front of Don Quixote as the shrieking crowd falls silent. And Don Quixote lifts his sword and taps the Bonesman on his left shoulder and says, 'By order of our order, I dub thee knight of Euloga.'"

It's a lot of mumbo-jumbo, says Robbins, but it means a lot to the people who are in it.

"Prescott Bush, George W's grandfather, and a band of Bonesmen, robbed the grave of Geronimo, took the skull and some personal relics of the Apache chief and brought them back to the tomb," says Robbins. "There is still a glass case, Bonesmen tell me, within the tomb that displays a skull that they all refer to as Geronimo."

"The preoccupation with bones, mortality, with coffins, lying in coffins, standing around coffins, all this sort of thing I think is designed to give them the sense that, and it's very true, life is short," says Rosenbaum. "You can spend it, if you have a privileged background, enjoying yourself, contributing nothing, or you can spend it making a contribution."

And plenty of Bonesmen have made a contribution, from William Howard Taft, the 27th President; Henry Luce, the founder of Time Magazine; and W. Averell Harriman, the diplomat and confidant of U.S. presidents.

"What's important about the undergraduate years of Skull and Bones, as opposed to fraternities, is that it imbues them with a kind of mission for moral leadership," says Rosenbaum. "And it's something that they may ignore for 30 years of their life, as George W. Bush seemed to successfully ignore it for quite a long time. But he came back to it."

Mr. Bush, like his father and grandfather before him, has refused to talk openly about Skull and Bones. But as a Bonesman, he was required to reveal his innermost secrets to his fellow Bones initiates.

"They're supposed to recount their entire sexual histories in sort of a dim, a dimly-lit cozy room. The other 14 members are sitting on plush couches, and the lights are dimmed," says Robbins. "And there's a fire roaring. And the, this activity is supposed to last anywhere from between one to three hours."

What's the point of this?

"I believe the point of the year in the tomb is to forge such a strong bond between these 15 new members that after they graduate, for them to betray Skull and Bones would mean they'd have to betray their 14 closest friends," says Robbins.

One can't help but make certain comparisons with the mafia, for example. Secret society, bonding, stakes may be a little higher in one than the other. But everybody knows everything about everybody, which is a form of protection.

Bones is not restricted to the Republican Party. Yet another Bonesman has his eye on the Oval Office: Senator John Kerry, Democrat, Skull & Bones 1966.

"It is fascinating isn't it? I mean, again, all the people say, 'Oh, these societies don't matter. The Eastern Establishment is in decline.' And you could not find two more quintessential Eastern establishment, privileged guys," says Rosenbaum. "I remember when I was a nerdy scholarship student in the reserve book room at, at the Yale Library, and John Kerry, who at that point styled himself 'John F. Kerry' would walk in."

"There was always a little buzz," adds Rosenbaum. "Because even then he was seen to be destined for higher things. He was head of the Yale Political Union, and a tap for Skull and Bones was seen as the natural sequel to that."

David Brooks, a conservative commentator who has published a book on the social dynamics of the upwardly mobile, says that while Skull & Bones may be elite and secret, it's anything but exciting.

"My view of secret societies is they're like the first class cabin in airplanes. They're really impressive until you get into them, and then once you're there they're a little dull. So you hear all these conspiracy theories about Skull and Bones," says Brooks.

"And to me, to be in one of these organizations, you have to have an incredibly high tolerance for tedium 'cause you're sittin' around talking, talking, and talking. You're not running the world, you're just gassing."

Gassing or not, the best-connected white man's club in America has moved reluctantly into the 21st Century.

"Skull and Bones narrowly endorsed admitting women," says Robbins. "The day before these women were supposed to be initiated, a group of Bonesmen, including William F. Buckley, obtained a court order to block the initiation claiming that letting women into the tomb would lead to date rape. Again more legal wrangling; finally it came down to another vote and women were admitted and initiated."

But Skull & Bones now has women, and it's become more multicultural.

"It has gays who got the SAT scores, it's got the gays who got the straight A's," says Brooks. "It's got the blacks who are the president of the right associations. It's different criteria. More multicultural, but it's still an elite, selective institution."

On balance, it may be bizarre, but on a certain perspective, does it provide something of value?

And is that relationship, in some cases, stronger than family or faith?

"Absolutely," says Robbins. "You know, they say, they say the motto at Yale is, 'For God, for country, and for Yale.' At Bones, I would think it's 'For Bones.'"