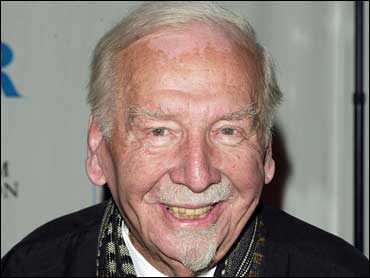 Skitch Henderson, the Grammy-winning conductor who lent his musical expertise to Frank Sinatra and Bing Crosby before founding the New York Pops and becoming the first "Tonight Show" bandleader, died Monday. He was 87.

Born in England, Lyle Russell Cedric Henderson moved to the United States in the 1930s, eking out a living as a pianist, playing vaudeville and movie music in Minnesota and Montana roadhouses.

He got his big break in 1937, when he filled in for a sick pianist touring with Judy Garland and Mickey Rooney. When the tour wrapped up in Chicago, he used the original pianist's ticket and went to Hollywood.

There he joined the music department at MGM and played piano for Bob Hope's "The Pepsodent Show." His friendship with Hope put him in touch with other stars of the day, including Crosby, who became a mentor to Henderson.

He studied with the noted composer Arnold Schoenberg, and Henderson's talented ear brought him renown from some of the era's most successful musicians.

"I could sketch out a score in different keys, a new way each time," Henderson said earlier this year.

That quicksilver ability earned him the nickname "the sketch kid," which Crosby urged him to adapt to "Skitch." It stuck.

During World War II, Henderson flew for both the Royal Air Force and the United States Army Air Corps. At his estate in New Milford, which he shared with his wife, Ruth, Henderson kept a collection of aviation memorabilia. Even at 87, he had said he hoped to fly the Atlantic once more.

After the war, Henderson toured as Sinatra's musical director and lived what he called a "gypsy lifestyle," touring the country with various bands. It was Sinatra's phone call that lured Henderson to New York.

"Frank said, 'I'm moving the "Lucky Strike Show" to New York. Get rid of those gypsies and get back here where you belong,"' Henderson recalled in 1985.

In 1954, NBC pegged him as the bandleader for Steve Allen's "Tonight Show," which brought Henderson into the nation's living rooms every night. Even as the hosts changed from Allen to Jack Paar to Johnny Carson, Henderson was a constant.

"People come to hear music that's accessible to them — old songs that are powerful and don't go away," he said.

Even in his late 80s, Henderson maintained a tireless work schedule as music director for the Pops, where he regularly served as conductor. He also was a frequent guest conductor at a number of orchestras around the world.

"I watch the public like a hawk. If I see boredom, I worry," Henderson said. "You can tell by the applause: There's perfunctory applause, there's light applause, and then there's real applause. When it's right, applause sounds like vanilla ice cream with chocolate sauce."