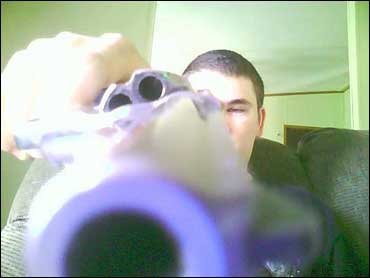 CBS News Investigative Producer Pia Malbran wrote this story for CBSNews.com with additional reporting from The Early Show's Will Goodman.

Personal Internet pages and web postings provide a disturbing glimpse into the racist minds of the two self-described "skinheads" who were allegedly plotting to carry out a mass killing spree that included beheading African-Americans and assassinating presidential candidate Barack Obama.

Yesterday, federal investigators announced the arrests of 20-year-old Daniel Cowart of Bells, Tenn., and 18-year-old Paul Schlesselman of West Helena, Ark., who were driving around in a car painted with swastikas and other white supremacist slogans while in possession of five stolen guns. Authorities are skeptical the men were a threat. They say there is no evidence of them actually trying to carry out an assassination, but during questioning the men allegedly told investigators they were preparing to kill 88 people "targeting a predominately African-American school, going state to state while robbing individuals and continuing to kill people." The men also allegedly said they wanted to "drive their vehicle as fast as they could towards Obama shooting him from the windows" while dressed in "all white tuxedos" and wearing "top hats."

While the alleged plot may never have been carried out, both men have their own Myspace pages where they make a series of racist assertions and proudly tote their guns.

On his MySpace page, Schlesselman lists his occupation as "being racist" and writes "I'm white. I'm proud. I get angry. I like guns. I like weapons. I need money wiggers…be afraid." "Wiggers" is a derogatory slang term used to describe a white person who emulates stereotypical mannerisms of African-Americans. He also posted a homemade video on MySpace in which he appears to be mocking "wiggers" and African-Americans.

He last logged onto his MySpace page on October 20 the same day, investigators say, Cowart traveled from Tennessee to Arkansas to meet with him and begin the alleged killing spree. On that day, Schlesselman listed his mood as "creative."

Schlesselman also lists his cell phone number on his MySpace page. CBS News called the number. His voicemail first plays what sounds like a racist country song. Then, Schlesselman leaves a disturbing rant filled with profanities and racial slurs against African-Americans. He ends the message saying "white power."

On Cowart's MySpace page, there are a series of photos showing guns displayed in different positions titled "my guns." In one photo, Cowart is holding a large rifle while wearing a sleeveless shirt. A swastika tattoo, typically associated with white supremacists, can be seen on his right arm. In another picture, he displays what appears to be an iron-cross symbol, often associated with racist skinheads, tattooed on his left chest. A message on his MySpace pages says: "Better to die quick fighting on your feet then to live forever begging on your knees."

(MySpace Page)
CBS News traced Cowart's email and discovered that he is a forum member of the website StormFront.org, reportedly the nation's largest website for white supremacists known as "white-power." In January, Cowart posted a note on a message board titled "what to carry for protection in a car?" He wrote "I live in Tennessee and I carry a expandable/collapsible police baton with me nearly everywhere. It is 100% legal here but I doubt it is in Jew York City." He continued, "I would carry a handgun, but as you know you must be 21 to do so. But I would go with the other suggestions of either a baseball bat, hammer, or some other tool."

In another posting about slavery, he wrote: "Why buy a slave? Haven't we learned our lesson already? If we didn't bring slaves over here in the first place, would things be so bad now? I think not..."

Cowart and Schlesselman are being held without bond in Tennessee. They are scheduled to appear before a judge on Thursday.
By Pia Malbran