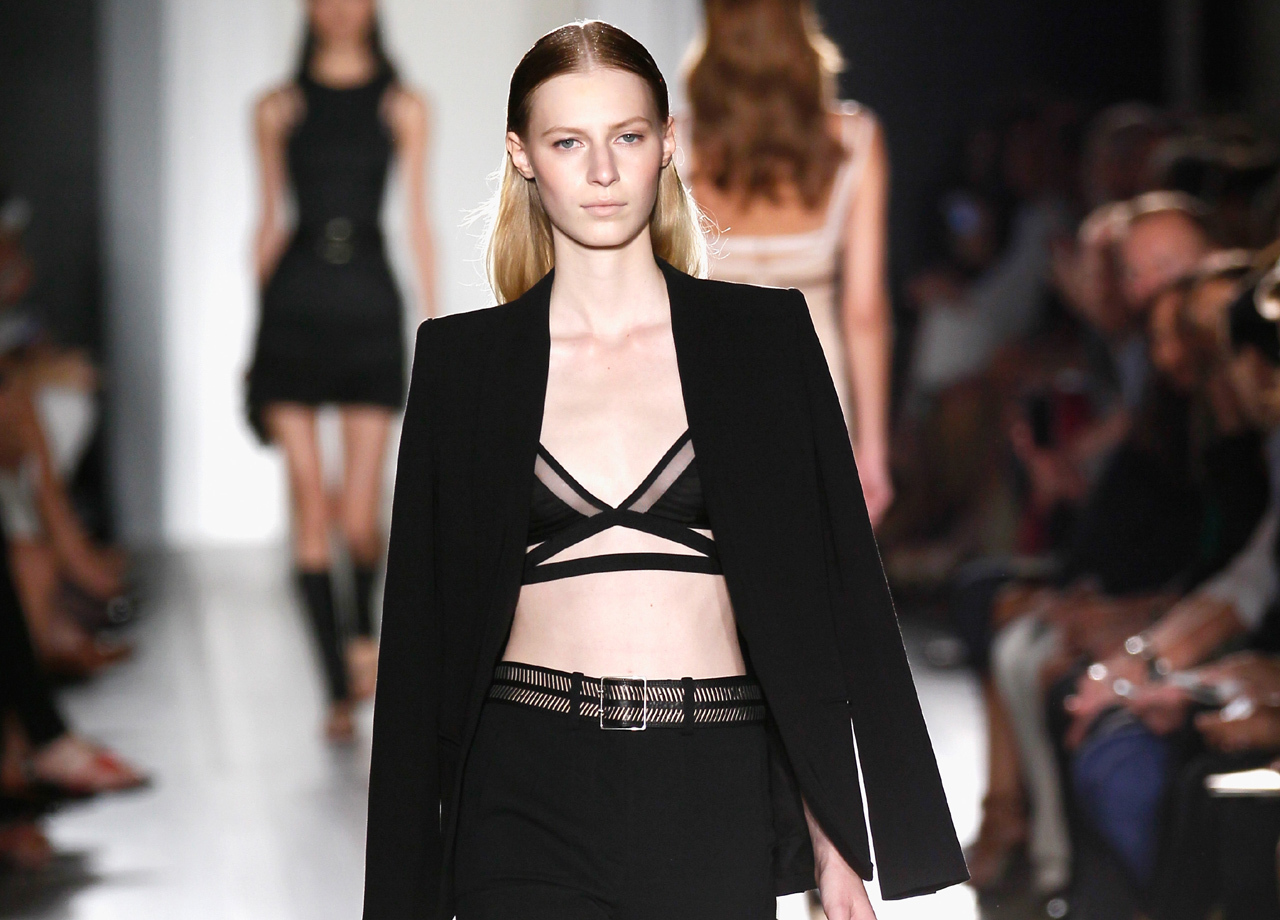 (AP) NEW YORK - Bikini season may be over, but this is no time to tone down the workout. Many of the styles on the runway at New York Fashion Week flash a bit of skin here or there: bare midriffs, cutout backs, keyhole necklines.

The silhouettes in spring previews that entered a fourth day Sunday aren't necessarily skin tight, but it's not a season of full-on floaty frocks, either.

"We've gone so far away from overt sexiness, but the reality is, sex sells. At some point the shopper wants to be sexy," said Hal Rubenstein, fashion director of InStyle magazine. "Illusion fabric on a shoulder or a little skin showing on a midriff gives you a hint without giving it all away."

Victoria Beckham continued the trend with bra-style tops. Many of Alexander Wang's looks were seemingly held together by fishing wire. Rag & Bone flashed some skin with strategic cutouts and at Peter Som, midriff-baring cutouts were carved into ladylike sheath dresses.

Mercedes-Benz Fashion Week continues through Thursday before the fashion crowd heads to London, Milan and Paris.

Victoria Beckham's show not only ends up looking like her signature pulled-together, well-edited style, but it feels like her, too.

She's the thoughtful hostess with waiters offering morning juice to the crowd at the New York Public Library, but she keeps the guest list very tight. She's one of the biggest draws of the week, but there's no frenzy of paparazzi photographers. (Husband David Beckham, however, did take some photos from his seat.)

Beckham said she checks — or doublechecks — every look to make sure "it looks good from every angle."

The clothes for spring had a delicacy that she said was new for her this season, although the clothes remained substantial and structured. It was the touch of illusion lace, the lingerie bra top or hemline of pleated chiffon that took the edge off banded short skirts, zip-back sheaths and shirtdresses.

The lingerie influences built on her knowledge of corsetry and fell naturally into the collection, Beckham explained after the show. Black and white were dominant, and Beckham used a poppy red as her bold contrast color. She was more interested in texture than crazy colors, she said, noting the black dress she was wearing, which mixed canvas, georgette, lace and chiffon.

"I want to design what I want to wear," she said.

The audience at Alexander Wang is trained to know the best is coming last.

The mostly inventive black-and-white, pieced-leather looks that filled the first part of Saturday's show would have held Wang's place as one of the princes of cool. There were sporty parkas, tops inspired by hockey jerseys and even some more refined halter dresses.

Wang could have called it a collection and be done with it.

However, the final parade of nine models — all wearing a cream color — had their embroidered tank tops, pencil skirts, crewneck dresses and Bermuda shorts turn into glow-in-the-dark lightsticks when they assumed a final pose on the runway and the lights went out.

Wang also created a stir by having model Liberty Ross — the wife of the director Kristen Stewart had an affair with — walk the runway, along with the likes of Erin Wasson.

"In such a short time, Alex has redefined urban utility," said Laura Brown, Harper's Bazaar features and special projects director, who picked a cut-out silver dress as her favorite. "There's always a sexiness to his clothes, but this season he brought a glamour, too."

It was a rainy Saturday night in Manhattan, and getting a taxi was murder. But fashionistas lined up patiently under umbrellas, undeterred, to catch one of the most buzz-worthy spring previews of Fashion Week: that of rising star Joseph Altuzarra.

Inside the Industria Superstudio in the chic meatpacking district, the excitement was palpable. Actress Kate Bosworth, a big Altuzarra fan, kissed acquaintances and greeted Mamie Gummer, the actress daughter of Meryl Streep. The NBA's Tyson Chandler posed for photos not far from actress Jessica Chastain.

The looks that greeted them on the runway were a combination of the very casual — navy-and-white striped cotton jackets and overcoats, for example, evoking kids' overalls — and the glamorous, in the form of gold fringes on everything from skirts to tanks, and crystal-encrusted garments like dramatic scarves draped high around the neck. Workday looks of simple cotton graduated to looks that suddenly shimmered and glistened under the lights, occasionally perhaps a bit blindingly.

The red carpet during the upcoming Hollywood awards season could be a sea of ocean-inspired gowns if Monique Lhuillier has anything to do with it.

Lhuillier, a favorite source for celebrity gowns, presented a bright aqua lace gown draped with a tulle overlay that gave the illusion of rippling waves — and so did a one-shoulder tiered gown in crepe. A sea-glass green gown was embroidered with sparkly beads and had a low, sheer illusion back, and a textured jacquard strapless gown with a trumpet hemline was an underwater kaleidoscope of colors, including blues, greens and purple.

"The inspiration this season came from a wonderful trip I had in Turkey and I was on a boat and I was looking at the beautiful landscape and water and I was like, that's it. This is the feeling I want for spring," Lhuillier said backstage.

"The Emmys are coming up and some of the looks have been selected so they're on hold," said Lhuillier. Bet the gold, coral-embellished sculpted gown that served as the finale is one them.